Is Villas-Boas a Mini-Me Mourinho?

Seven years after Jose Mourinho's ascension to the Stamford Bridge throne, Chelsea have gone back to Porto to appoint his protege Andre Villas-Boas, handing the precocious 33-year-old the challenge of claiming back the Premier League title and winning the Champions League.

But is Villas-Boas, from 2002-09 a key member of Mourinho's backroom staff at Porto, Chelsea and Inter Milan, a clone of his mentor? I spoke to Portuguese journalist Jose Delgado and former Inter midfielder Olivier Dacourt to find out.

Mourinho is from Setubal, 182 miles south of Porto, but Villas-Boas - who, according to Delgado, once claimed that sitting on the bench as Porto coach was like "sitting in the chair of my dreams" - is Porto born and bred.

"The fans thought he was one of them," says Delgado, "and the president thought he had more than just a working relationship with Villas-Boas. They wanted him to stay for many years. No-one thought he would leave so soon. There have been some protests, but only out of sadness."

Villas-Boas has a superb human touch and all the players loved him. He is more human than Mourinho - Ex-Inter midfielder Olivier Dacourt

Mourinho took his time to get to the top, but Villas-Boas's rise has been meteoric, as Delgado explains. "He lived in the same apartment block as Porto manager Sir Bobby Robson and, as a 16-year-old, would talk to the coach, giving his opinions. Robson found him extremely interesting because he wanted to know everything about football."

Robson sent Villas-Boas off to get his coaching badges and, by the time Mourinho arrived as Porto boss in 2002, Villas-Boas was already working with the under-19s. He was put in charge of the Opponent Observation section, and his role in Mourinho's rise to stardom was born. 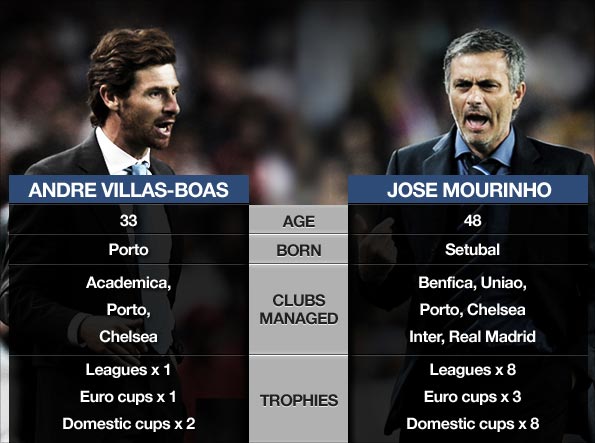 What is clear is that Robson had an enormous impact on both men. Mourinho has always spoken about the debt he owes the former England manager, and Villas-Boas is no different.

"Bobby allowed a 16-year-old to approach him and talk football tactics with him. Then he took me to training, watching sessions. He had that respect for a young boy who approached him in an apartment block in Porto," said Villas-Boas.

Upon taking over at Porto last summer, Villas-Boas, who has a grandmother born in England, said he considered himself more like Robson. "I see myself more in the image of Sir Bobby than Mourinho. Like him, I've got English heritage, I've got a big nose and I like red wine."

But he has also acknowledged the importance Mourinho played in his education. "He introduced me to professional football and I'd like to dedicate this to him," said Villas-Boas after victory in the Europa League final against Braga in May.

Who could forget Mourinho waltzing into English football in the summer of 2004 and immediately declaring: "I am a Special One"? Can we expect the same level of confidence from Villas-Boas?

"People focus too much on the manager," he said last season. "Success is down to the structure of the club and the players. Football is not a one-man show. My job is to nurture talent, to allow players to explore their capabilities to the full. I'm no dictator. I don't see it as a one-man show." 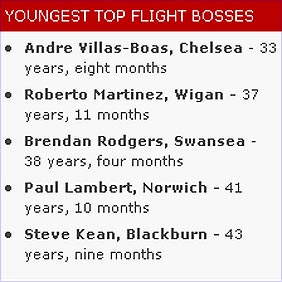 Delgado says the two are very different people. "Villas-Boas learned a lot from Mourinho, but he is a different person, definitely not a Mourinho clone. He knew from the beginning he couldn't be Mourinho, he had to go his own way, be his own man.

"Mourinho is aggressive and always needs to be fighting someone, but Villas-Boas doesn't need that. He is, though, very strong in the mind games and intelligent, so he won't hide from anyone or anything. He will happily take on someone like Sir Alex Ferguson, he won't be afraid."

"Villas-Boas has a superb human touch and the players loved him, every one of them," said Dacourt of his time at the San Siro. "He is more human than Mourinho. He always wanted to talk to us, find out how we were. We knew how young he was but he wanted to learn and worked very hard at improving in every area."

This is where the two men are most similar. Mourinho's rapport with the likes of John Terry and Frank Lampard at Chelsea is legendary, and Villas-Boas saw at first hand just how important it was to gain the respect of key players in the dressing-room.

Porto goalkeeper Helton, seven months younger than Villas-Boas, said recently: "He looks after us, he gives us tranquillity and reminds us what we're capable of. He's a friend of the team and a friend to every player. He's one of the best coaches I've worked with and allows us to play with lots of freedom."

Striker Radamel Falcao agrees: "Villas-Boas has made 24 players at Porto feel relevant and important - and that is not easy," while Markus Berger, who played for Villas-Boas at Academica, told my colleague John Sinnott: "He emphasises creating a big spirit in the group so that everybody works together and everybody will push for the team. He has a great personality and you want to work with him."

So how can Chelsea fans expect their team to line up? "Villas-Boas likes 4-3-3, the same as Mourinho," says Delgado. "But it would be fair to say Mourinho is more pragmatic than Villas-Boas and a little more radical when he feels he needs to be.

"People say Villas-Boas's teams are more attacking, but he didn't need to play defensively this season because Porto were winning every game. Who knows what he'll do at Chelsea? He's only been a manager for a year-and-a-half!"

It is unlikely that Villas-Boas will prove to be a one-trick pony where tactics are concerned. He is, after all, the man who spent four days at a time putting together exhaustive dossiers on opponents while he worked for Mourinho.

Mourinho, master of the mind games, enjoyed his fair share of battles with the media and his fellow managers alike during a compelling three-and-a-half years at Chelsea, but will Villas-Boas keep us similarly entertained?

"Oh you'll have fun, be sure of that," says Delgado. "It might not be quite the same as Mourinho, but you won't be bored. Villas-Boas will give you plenty to write about."