Every so often, football has a habit of producing a truly remarkable team, a side that makes fans of all persuasions sit up and take notice and - perhaps begrudgingly - acknowledge them as something special.

It's a topic that could fill endless hours of nostalgia, discussion and argument: which is the greatest club side of all time?

With superstars like Lionel Messi, Xavi and Iniesta in their ranks, the current Barcelona side - who face Manchester United in a much-anticipated Champions League final - have been talked up as one contender for the title and BBC Radio 5 live's Monday Night Club will bring together a panel of experts to debate the issue on 23 May, five days before the clash at Wembley.

But are Pep Guardiola's side better than the Real Madrid team of Ferenc Puskas and Alfredo di Stefano in the 1960s, Johan Cruyff's Ajax side in the 1970s, the Liverpool of Kenny Dalglish in the 1980s, AC Milan's all-conquering 1990s outfit or the Arsenal Invincibles of 2003-2004? 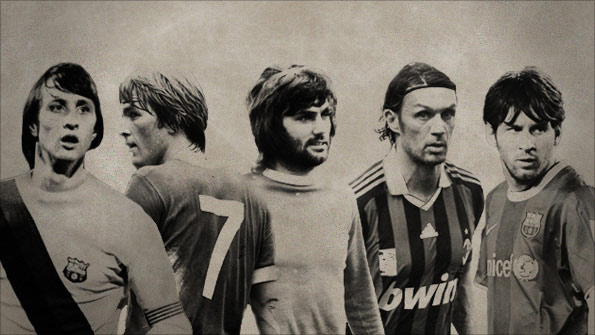 Cruyff, Dalglish, Best, Maldini, Messi... all have claims to have played in the greatest club side ever

The Monday Night Club wants to know your take on the greatest club side of all time and they will use some of the comments from this blog on BBC Radio 5 live on Monday from 2100 BST as they attempt to come up with an answer to the question.

In no particular order, here's a list of 20 of the teams that should probably form part of the debate, but feel free to look outside the box and come up with a few of your own.

4. Celtic, 1967. Arguably the most remarkable team on the list, given that every single member of Jock Stein's European Cup winners was born within 30 miles of Glasgow.
Stars: Ronnie Simpson, Billy McNeil, Jimmy Johnstone, Bobby Lennox.

7. AC Milan, 1989/90. Arrigo Sacchi, with the help of Silvio Berlusconi's millions, created one of the most formidable teams in history. They were the last team to retain the European Cup.
Stars: Paolo Maldini, Franco Baresi, Ruud Gullit, Marco van Basten.

8. Bayern Munich, 1970s. The greatest German side, Bayern became the third club to win the European Cup three times in a row from 1974-76, and have only won one since.
Stars: Sepp Maier, Franz Beckenbauer, Uli Hoeness, Gerd Muller.

9. Real Madrid, 1950s/60s. Perhaps the team to which all others will always be compared. Won the first five European Cups and they played football way ahead of their time.
Stars: Francisco Gento, Raymond Kopa, Ferenc Puskas, Alfredo di Stefano.

10. Tottenham, 1960s. Under Bill Nicolson, they became the first English team in the 20th century to win the League and FA Cup Double in 1961 and won the European Cup Winners' Cup in 1963 too.
Stars: Danny Blanchflower, Cliff Jones, Bobby Smith, Jimmy Greaves. 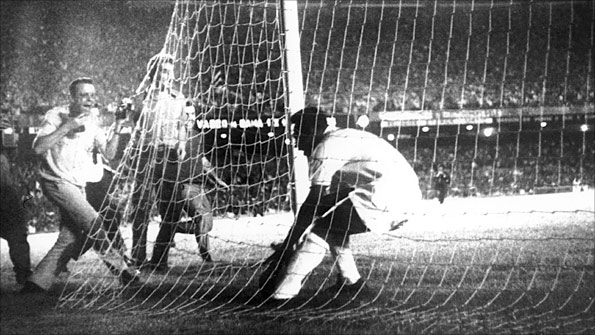 Pele is regarded by many as the finest player of all time. Photo: Getty

11. Santos, 1960s. Won several domestic honours, were South American champions in 1962 and 1963 and won the Intercontinental Cup in both years too as they dominated world football.
Stars: Gilmar, Coutinho, Pepe, Pele.

14. Leeds United, 1960s and 70s. Don Revie's team may not have won too many friends, but they knew how to win - seven major trophies and never finishing out of the top four between 1965 and 1974.
Stars: Billy Bremner, Norman Hunter, Johnny Giles, Allan Clarke.

17. Liverpool, 1990. Having lost the league title to Arsenal on the last day of the season in 1989, Kenny Dalglish's Reds responded in brutal fashion, cruising to an 18th title by nine points.
Stars: Alan Hansen, John Barnes, Peter Beardsley, Ian Rush.