Real Madrid 1960 - the greatest club side of all time

They whittled the list - exclusively made up of European Cup winners as well as Brazilian sides Santos and Sao Paolo - to three and were in total agreement that the Real side comprising Alfredo di Stefano and Ferenc Puskas that thrashed Eintracht Frankfurt 7-3 in the 1960 European Cup final was without equal. 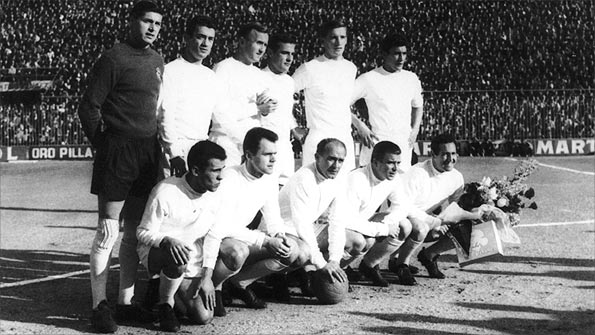 Here were the candidates, along with a choice quote from one of the panel.

Manchester United, 1999
"They scared the bejesus out of everyone in Europe that season" - Marcotti

Liverpool, 1984:
"Liverpool won it so often in such a short space of time, but this was their best team" - Armfield

Nottingham Forest, 1980:
"When you talk about iconic managers, Brian Clough is the guy you're talking about. He made it all possible" - Ingham

Celtic, 1967:
"What a remarkable team that was, and not just because they were all born so close to the ground. But it was a fairytale" - Armfield

Santos 1962:
"That was the team that saw Pele at his absolute best. They went to Benfica in the Intercontinental Cup and were 5-0 up in Portugal. Pele said it was his greatest performance" - Vickery

Sao Paolo 1993:"To give you some idea, they beat Johan Cruyff's Dream Team in 1992 in the Intercontinental Cup and then Fabio Capello's AC Milan a year later" - Marcotti

Real Madrid 1960:
"It was a kind of football was hadn't seen before. They had the whole package, and the star that shone brightest was Alfredo di Stefano" - Armfield

Benfica 1962:
"They had Germano, one of the best central defenders I've ever seen, and Eusebio. Those two players took them to greater heights" - Armfield

Inter Milan 1965:
"The big innovation was manager Helenio Herrera with his brand of counter-attacking football that became known as Catenaccio" - Marcotti

Ajax 1972:
"Total Football wasn't a system, it was a philosophy. Johan Cruyff's wandering was pivotal to it. They were ground-breaking" - Ingham

Ajax 1995:
"There was a great blend of youngsters and older guys. That team was about the system - Louis van Gaal's system" - Marcotti

AC Milan 1989:
"Arrigo Sacchi's was the last great tactical innovation in football. Never had a side pressed like that side did. That's why they were a cup team" - Marcotti

AC Milan 1994:
"If you were looking for wow factor, look at the Barca team in 1994. But Milan, their team that European Cup final night when they beat Barca 4-0 - they were on a different planet" - Ingham

Bayern Munich 1975:
"They beat my Leeds team in the final that year. They had two aces - Franz Beckenbauer and Gerd Muller, who could get a goal out of nothing" - Armfield

Barcelona 1992:
"That was just a phenomenal team. But if I could single one out, it would be Michael Laudrup, who was one of the purest, most elegant players I've ever seen" - Marcotti

Barcelona present:
"They have redefined a style of playing with over 70% possession. No-one else does this. Of course they can be beaten. but if they win on Saturday against Man United, they will have won it unlike anyone else before" - Marcotti

Having narrowed it down to Liverpool's class of 1984, Real Madrid's 1960 vintage and the AC Milan team of 1989, the panel plumped for Di Stefano and Puskas.

Let us know whether you agree. And do you think Barcelona, if they beat Manchester United at Wembley on Saturday, could potentially rival Real for their crown?