As Pep Guardiola faced the press on Saturday night at Wembley Stadium, he did not look like a man on top of the world. He looked spent, both physically and emotionally, and at one stage begged one of his interviewers for mercy.

"I'm sorry, I'm so tired," said the Barcelona manager, about an hour after the final whistle in their majestic Champions League final dismantling of Manchester United. "I cannot think right now. Please let me go away and have a rest and then I can think."

The contrast with his opposite number Sir Alex Ferguson could not have been more stark. Ferguson, who had just watched his team receive what he called a "hiding", was immediately on the front foot, talking about how his squad could improve and how he would go about building a team to beat brilliant Barca.

"You shouldn't be afraid of a challenge in life," said Ferguson. "We all have a challenge with this Barcelona team. Not just Manchester United, but everyone."


The challenge is present for Guardiola, the creator-in-chief of this era-defining football team, as well. Contracted to the Camp Nou until the end of next season, the 40-year-old, who has now won a staggering 10 trophies in his three seasons in charge - one fewer than the legendary Johan Cruyff in only half the time - has steadfastly refused to commit his long-term future to Barca.

He has spoken in the past about what a difficult job being Barcelona boss is, of how gruelling the sheer the size of the club and the extraordinary expectation level that goes with it can be. In his three seasons in charge Guardiola has won it all, but on Saturday, in the immediate aftermath of his greatest triumph, he gave an indication of the fear of failure that drives him.

"Sir Alex is amazing, it's unbelievable what he has done in 25 years at United," said Guardiola. "But in Spain, in Italy, to have 25 years in the same job... it is impossible. If you don't do so well in one year, in one-and-a-half years, you get fired.

"Do I still want the challenge? I have to look inside of me for the answer to that. I will continue for another year and then I will decide. My life is decided by passion and when that's gone I'll go home and rest a little bit and try to get that passion back."

When he talks about this Barcelona team he manages, Guardiola sounds like a proud father. He saw many of these youth team products coming through the ranks when he was a player at the club and now he sees it as his role to provide them with the perfect platform to exhibit their outrageous talents.

Once again at Wembley, the club's cantera - their youth acedemy - was responsible for doing most of the damage, with Pedro and Lionel Messi both scoring and the untouchables, Xavi and Andres Iniesta, ensuring United never came close to getting a foothold on the game in midfield.

Guardiola will not find it easy to walk away from a group of players who are now seriously asking pundits to consider them a candidate for the best team of all time and, equally important you feel to him, people he admires away from the football field as well. 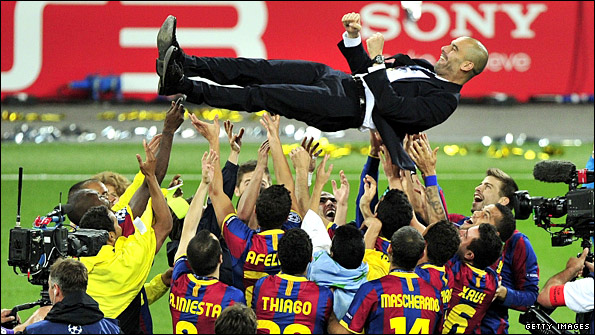 The close bond between Guardiola and his players is undeniable. Pic: Getty Images

Part of the philosophy of the club is that they produce impressive young men who treat others with respect and go about their work with humility. On Saturday, these qualities could be seen both in the guard of honour the Barca players formed for United after the game and then when they asked Eric Abidal - who had surgery on a liver tumour only two months ago - to put on the armband and collect the trophy from Uefa president Michel Platini.

"It is a privilege to be a part of this club and a privilege to have these players and I am so happy to be the coach of them," said Guardiola, who also won the European Cup as a player with Barca in 1992 when they beat Sampdoria at Wembley.

"Players are human beings and you need to look at that too. Whether you win or lose there's a human quality and Carles [Puyol, the club captain] made a great gesture to Eric which is to his credit."

As he has always done as player and now coach, Guardiola leads by example. Asked many times on Saturday whether the crushing manner of Barcelona's victory meant they deserved to be talked about on a par with, or even on a higher level than, Cruyff's 'Dream Team' that captured the cup 19 years ago, he was quick to pay homage to the class of '92.

"We wouldn't be here right now if it wasn't for them," said Guardiola. "It all started then with Cruyff and Carles Rexach. They were the teachers, they showed us the way we have to play. We follow what they taught us, and we try to play in the right way now. We want to show the world that it is possible with beautiful football.

"All I know is that we try to play as well as possible, and in 10-15 years we hope people will remember us as one of the best. We just want everyone to enjoy this, and for us it's marvellous too."

Guardiola has been linked with the vacant managerial position at Chelsea in the past couple of weeks, but it is hard to imagine the born-and-bred Catalan even considering working for any other football team. The bond he has with Barca, which began as a 13-year-old back in 1984, is so strong, and he engenders so much goodwill towards them with his humble nature, that his name has become synonymous with theirs.

Ferguson, the oracle of football management, wasted no time in passing on some advice to his young adversary when the Scot was asked why Guardiola would be considering leaving Barca, as well as expressing his admiration for the winners.

"In my time as manager here, they are the best team we've faced, I think everyone acknowledges that and I accept that," said Ferguson. "Great teams go in cycles and the cycle they're in at the moment is the best in Europe, no question about that. It's a great moment for them and they deserve it.

"If Pep leaves he'll never get this experience again, that's for sure."

If next season is to be his last season in charge, then that is something Guardiola will have to come to terms with. As he fought for the strength to finish his post-match press conference on Saturday, his eventual exit suddenly loomed large on the horizon.

"My future will be very tough," he admitted. "I'll be at another club, trying to find these type of players... But maybe that will be a great challenge for me, to take the players I will have at that club and try to get them to reach their top level, no?"

On Saturday at Wembley, Guardiola's current crop reached a level seldom seen in recent years. Whatever the future holds for this most likeable of personalities, he has already etched his name and that of his team into the history books and into many football lovers' hearts.

A few days before, Cruyff had suggested Guardiola might walk away even if Barca beat United because of the "certain pressures" of the job. "He has worked very hard and it wouldn't surprise me if he left," said the coach's former manager and mentor.

If and when he chooses to quit, Guardiola's legacy is already assured. But watching him bask in the after-match glow of his greatest personal triumph as the Barca legends he has helped create threw him jubilantly up into the London night sky, it almost seems impossible that he ever would.