Forest, a potted history of the play-offs, and me

May 2011: Along with many other Nottingham Forest fans, once again I'm confronted by something that, by rights, should terrify me to my core: the play-offs.

It might sound inoffensive to you, but the gut-churning, wretched picture of desolation it conjures up in my mind serves as a timely reminder of the worst three moments I've endured as a football fan.

No, my team have never gone bust or dropped out of the Football League; but by the age of 30 I had suffered four relegations (one, unthinkably, to League One), defeat in the FA Cup final and the premature death of Brian Clough, the greatest manager that ever lived.

Sad, desperate times all of them - but not as judderingly, sickeningly hard to stomach as three occasions when it felt like I and thousands of people around me had been lifted on to cloud nine, only to immediately find ourselves falling off the end of the world.

Yes, Forest are back in the play-offs, the Championship's four-team end-of-season extravaganza that will climax at Wembley on Monday, 30 May with one lucky participant glorying in promotion to the promised land of the Premier League.

These are the games that consistently produce television gold. The prize is so great and the tension so all-encompassing that reasonable human beings do incomprehensible things - just ask Yann Kermorgant. They are thrilling, wonderful spectacles and if your team are not playing in them they are a prestigious part of the football calendar. 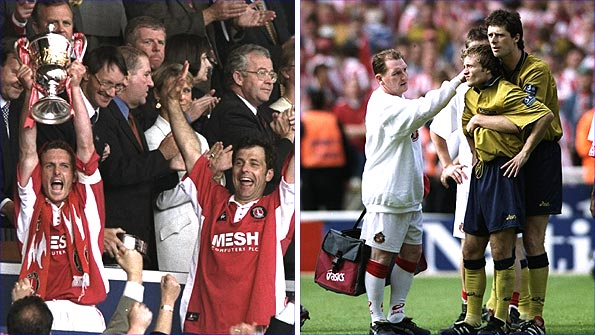 The triumph and the glory... Charlton beat Sunderland in 1998 in one of the great play-off games

And don't get me wrong, it's not that the prospect of watching top-flight football again at the City Ground doesn't give me goosebumps. It's just that, having witnessed at first hand Forest's extraordinary hat-trick of play-off capitulations, I'm not ready to plan trips to Anfield and Old Trafford quite yet.

Having been given the green light to write what I hoped would be a partially cathartic piece about Forest and the play-offs, I'm already racked with doubts. But cold comfort ahead of the two-legged semi-final tie against Swansea lies in being almost certain that football cannot possibly be as brutal again - for us Reds, anyway - as it was in 2003, 2007 or 2010.

Talking of which, let's deal with the past.

When play-offs were introduced to English football in the 1986-87 season, Forest were an established club in the old Division One, usually challenging in the top half of the table. Even after surprise relegations in 1993 and 1997, they managed to win automatic promotion the very next season both times. And that's where the bouncebackability ends.

It all started to unravel when Forest dropped out of the Premier League for the third time in 1999, a drop to the void from which they have never returned. After two years of expensive failure under David Platt and one of much-needed stability with Paul Hart as boss, former Reds defender Hart led his young team to sixth in the league in the 2002-03 season and the club's first encounter with the end-of-term lottery.

I went to the home leg excited about this voyage into the unknown and optimistic about our chances of getting past Sheffield United and making it to the final at the Millennium Stadium. I got into the spirit of it all so much I even donned a giant polystyrene hand for the first - and only - time.

That game was a relatively serene 1-1 draw, with little sign of the carnage to come at Bramall Lane five days later. Unable to get my hands on a golden ticket, I travelled back to the City Ground on Thursday,15 May 2003 to watch the second leg on TV from a bar inside the club's Trent End stand. It was heaving, and expectation soon began to permeate throughout the room.

Forest, shorn of key centre-back Michael Dawson, were second favourites, but they weren't playing like it. David Johnson fired in for 1-0 and, just before the hour mark, Andy Reid's volley sent us into delirium.

I got a text from a mate asking when and where we should meet the following day to start queuing for tickets to Cardiff, and that's when the drama really started to unfold.

Michael Brown's heavily-deflected free-kick at once hauled the Blades back into it, Steve Kabba's stunning volley levelled matters and with a bar full of people on the brink of hysteria, we headed into extra time.

It wasn't to be. Paul Peschisolido's jinking run and finish in the 112th minute meant Forest were behind in the tie for the first time and when Des Walker - who had headed into his own net 12 years previously when we lost the FA Cup final to Spurs, also in extra time - nodded past his own keeper it was all over, despite a last-gasp consolation making it 4-3 (5-4 on aggregate). 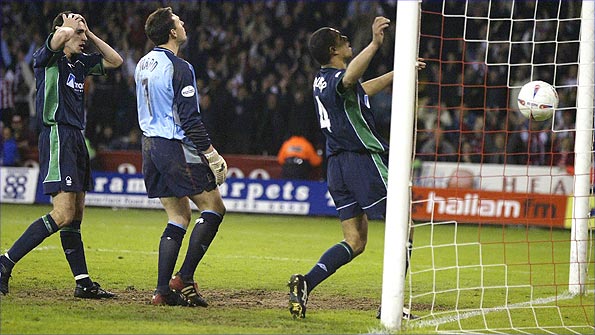 I'll never forget surveying the wreckage of that room after the final whistle. Someone threw a glass at one of the screens, shards flying off in all directions, and that was my cue to leave. I sat on the banks of the River Trent, wondering how I could have reached the age of 22 without realising that following Forest could be even crueller than supporting England (Italia '90, Euro '96, France '98).

I was ill for five days in the aftermath of that defeat. The doctor might have diagnosed it as gastro-enteritis, but I knew differently. Our first encounter had seen the play-offs hit me for six, but I knew there would be more.

Four years on and Forest had sunk even lower. The club failed to recover from 2003 and two years later were ignominiously relegated to League One, in the process becoming the first European Cup winners to be demoted to the third tier of their domestic game.

Under unconvincing manager Colin Calderwood they had a chance to bounce back at the second attempt when finishing fourth in 2006-07, setting up a two-tie showdown with Yeovil, an outfit well-versed in giant-killings throughout their history.

It was immediately - yet forgivably - billed as David v Goliath; the two-time champions of a continent versus a club that had spent its history in the non-league until 2003. When Forest won the first leg 2-0 at Huish Park in front of fewer than 9,000 spectators, a first trip to the new Wembley seemed assured.

The second leg on Friday, 18 May 2007 remains the most inexplicable football match I have ever seen with my own eyes.

I still can't believe it. With 81 minutes gone, Forest led 3-1 on aggregate - but an Alan Wright own goal and Marcus Stewart header forced the extra half hour, with Forest reduced to 10 men after second-half substitute David Prutton's kamikaze cameo had ended in a stoppage-time dismissal.

Reds midfielder Gary Holt immediately cancelled out Lee Morris's 92nd-minute strike, but with all our subs used up and the stricken Wright unable to walk, defeat for the nine men was inevitable, Aaron Davies applying the coup de grace to leave both sets of supporters in a state of bewilderment.

Promotion followed the year after (automatic, naturally) and soon the Championship play-offs came calling again. Except this time it felt different. The good times were back; the expectation of yore replaced by a pride in Billy Davies and his refreshing young team's easy-on-the-eye style and impressive third-place finish.

After a 2-1 defeat at Blackpool in the first leg not many fans rocked up to the City Ground on Tuesday, 11 May 2010 already planning their trip to north London, but if it is the hope that kills you, I'd have been on life support for much of that night in Nottingham.

Rob Earnshaw struck either side of a DJ Campbell goal to twice level on aggregate going into the last 20 minutes, at which point memories of Sheffield United and Yeovil came flooding back as Forest surrendered in a manner which may have even surprised some veterans of '03 and '07.

Stephen Dobbie's effort was deflected in, Campbell curled agonisingly past Lee Camp and then the striker completed his hat-trick by firing in a rebound - the three goals coming in the space of seven soul-shattering minutes to leave Forest, who again grabbed a late consolation to make it 6-4 overall, on their knees.

At this point, I have to say I am aware that there are a million fans of other clubs who have their own nightmare play-off stories. I watched the epic 1998 final between Charlton and Sunderland on TV like everyone else and I was at the Millennium Stadium as a neutral in May 2001 to see Walsall break Reading's hearts in extra time.

If I've learned anything from my own team's history, it's that these games don't do rhyme or reason, they don't take into account form or history and they don't give a damn how crushing the manner of the defeat.

On Thursday, I'll arrive at the City Ground for my fourth date with the play-offs, chastened by what has happened in the past and intrigued as to whether our elimination can get any more surreal this time around.

Or maybe - after that bout of pessimism - it'll surprise me even more and we won't be knocked out.

Forest... At Wembley... Winning promotion... After eight years of nightmares, that is the dream.