Since he first set foot in England nearly five years ago, it has often felt as though Avram Grant has been fighting a losing battle.

In almost five years he has had spells at Portsmouth (twice), Chelsea and West Ham; five years in which he has had to deal with a seemingly never-ending stream of rumour and innuendo about his future.

But as he faced the press on Tuesday night at Upton Park, after The Hammers had taken a step towards their first appearance in a Wembley showpiece for 30 years with a Carling Cup semi-final first leg win over Birmingham, Grant finally seemed to be at peace with his unenviable situation.

Besieged by questions for most of the last two months about his supposedly imminent dismissal, Grant has, this week, had to fend off speculation that West Ham will terminate his contract as manager at a board meeting on Wednesday.

There has been no hiding place for the first Israeli manager in the English game; a man who snuck in through the back door with roles as director of football at Portsmouth and Chelsea before being catapulted into a spotlight in which he never seemed fully at ease when he replaced Jose Mourinho at Stamford Bridge in September 2007.

Grant knew he would be asked the question yet again in the bowels of the Boleyn Ground on Tuesday, despite the manner of his team's 2-1 triumph after being reduced to 10 men early on in the second half with the score 1-1.

"I understand why you're asking," he began slowly, hands clasped in front of him.

His eyes scanned the room for an escape route from what must at times feel like his own personal adaptation of a Jean-Paul Sartre play, where hell is not just other people, but also journalists.

"However, there are seven teams in the Premier League in the same position as us, more or less, and yet I am the only one you keep asking these questions to.

"I'm not complaining against you because I know this is what you do, but you must realise I'm not the person to ask. If you want an answer about my future, you need to ask someone on the board, not me.

"I've lived with these rumours since day one at West Ham. If it was quieter, I believe it would help the players more. But I don't think about why it happens to me because I don't have time - I focus on the team and the players, that's all." 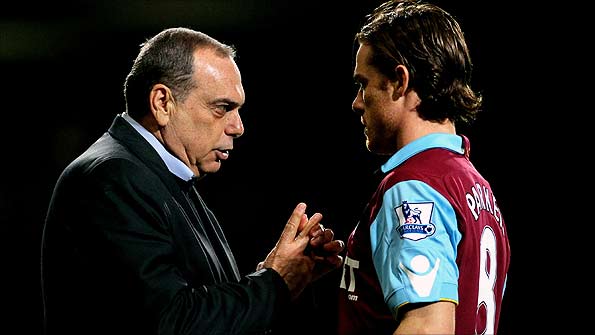 Just as Grant thought he could get on with talking about the game, he was reeled back in with yet another question about his future. As silence fell over the media room, so a big smile appeared on his face.

"Don't worry about me. I know you worry about me, but try not to, I'll be fine," he said, breaking into laughter. "I really appreciate that you like me so much that you want me to be close to you. I like you also, by the way."

If it is an English trait to back the underdog, then few managers can have received as much support against the odds as Grant in recent years. What is most unfortunate about the seemingly imminent end to his tenure is that it looks likely to happen just as he seems to have turned West Ham's fortunes around.

Four wins and two draws from their last seven games do not immediately stand out as form dire enough for the Upton Park hierarchy to bring down an axe which has been hovering over Grant for what must seem like an eternity.

Only 11 days ago they had risen to 15th in the Premier League and were celebrating an impressive haul of seven points from three games over the festive period - a sequence which appeared to have given Grant a well-earned stay of execution.

But a 5-0 drubbing at the hands of the extravagantly inconsistent Newcastle - a team that has also thrashed Aston Villa 6-0 and high-flying Sunderland 5-1 this season - appeared to make Grant's employers edgy once more.

What may have sealed Grant's fate further was his attack on director Karren Brady after she used her column in The Sun on Saturday to reveal the reasons why the Hammers pulled out of a move for Aston Villa's Steve Sidwell, who then signed for Fulham.

Grant, so used to keeping his counsel while all around him go public, did nothing to hide his fury. "All the things I have to say to the people at the club I say to them directly," he said. "We [Grant and Brady] don't have a problem but I speak with the owners. I'm dealing with the owners and that is the most important thing."

Judging by Monday's newspapers, which suggested Martin O'Neill and Sam Allardyce had already been lined up to take over from Grant, the co-owners David Gold and David Sullivan, in conjunction with Brady, have already made their minds up.

It would be ludicrous to suggest the West Ham board did not want to win on Tuesday with a Wembley final and everything that goes with it at stake, but if they are going to sack Grant he has not made it easy for them.

For 45 minutes, West Ham were magnificent, pouring forward with intent and quality and forcing Birmingham goalkeeper Ben Foster to make several fabulous saves to keep the visitors in the tie.

When they were pegged back to 1-1 in the second half and then rocked by the foolish sending off of Victor Obinna moments later, they stiffened their sinews, pooled their collective resources and, roared on by a wonderful crowd, scored a winner against all odds to take a slender lead to St Andrew's in two weeks' time.

My last press conference with Grant before Tuesday was at the Luzhniki Stadium in Moscow in May 2008, after Chelsea's shattering defeat on penalties in the Champions League final at the hands of Manchester United.

Rain-soaked, desperate and defeated that night, he was sacked three days later. It may be asking too much to hope that the fates are kinder to Grant this time around.