On Thursday, with cameras flashing in his face and a country's sporting press hanging from his every word, one of the most exceptional young footballers in the world will offer a very rare glimpse into his off-field personality.

At a news conference arranged by Belgian champions Anderlecht, their 17-year-old striker Romelu Lukaku will sit alongside the club's manager Ariel Jacobs and answer questions from the assembled media throng.

Having spent the best part of two years being the subject of all kinds of transfer speculation which has seen his name linked with the likes of Real Madrid, Manchester United and Chelsea almost on a daily basis, it is a chance finally for the teenager to do some talking of his own.

But just who is Romelu Lukaku? It is a safe bet that if you support one of Europe's biggest clubs, your team has been linked with his signature. That's not too surprising when you consider that this prodigious, precociously prolific goal-getter has set football in his homeland alight and fired warning shots of his talismanic talent around the world despite his tender age.

I'll level with you straight away - until a recent trip to Athens, where I saw him play for Anderlecht against AEK in the Europa League, I didn't know too much either (apart from the fact that his name provides a regular mention in our gossip column, where his physical similarities to the Chelsea striker often earn him the nickname 'the new Didier Drogba').

Suffice to say I'm glad I interrupted a non-football-based break to go along to a sparsely-populated Olympic Stadium and watch Lukaku in action in an otherwise entirely unremarkable Group G contest that ended 1-1.

I wanted to find out what all the fuss was about; I'd have liked longer, but it came down to 90 minutes to try to decide whether this young man was worth some of the hype he has attracted, or whether he is destined to be another footballer talked up to the extent that his actual ability could never match the ideal we have been sold.

The first thing that struck me was that Lukaku is a physical phenomenon. When he emerged from the tunnel, last in the Anderlecht line, I was genuinely taken aback by how a 17-year-old could be so developed. His upper body resembles that of a heavyweight boxer - something he underlined when he took his shirt off after the final whistle.

Lukaku is no normal 17-year-old and he's not a normal striker either. The 6ft 4in hitman is blessed with such fearsome attributes he can do everything a teenager shouldn't be able to - outmuscle defenders, win almost every aerial challenge and bring his team-mates into play. He was being asked by Anderlecht to play the lone striker's role of a man 10 years his senior, and though he battled away heroically, I couldn't help but feel something wasn't quite right.

My instincts were supported later by a couple of conversations with Belgian journalists about their country's new Wunderkind. Lukaku, they argued, is a rare talent, but he is not getting better at Anderlecht because they don't play in such a way as to improve his technical skills.

By firing long balls over Lukaku's head and using his pace and power to frighten opponents, Anderlecht are able to win the majority of their Belgian league games and some in the Europa League too. But his raw talent, like any 17-year-old, requires fine-tuning, and some believe he will only get that help when he moves to a bigger club. 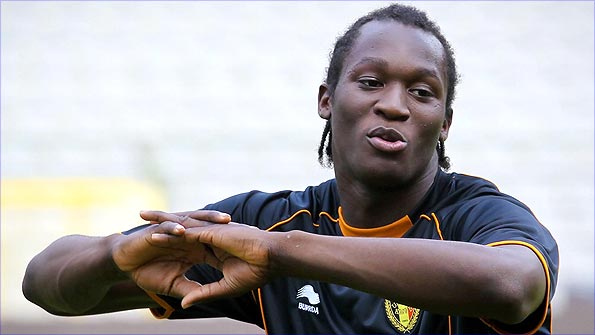 Lukaku, who still goes to school, may already be a victim of his own success. Last season he burst on to the scene at Anderlecht and finished the campaign as top scorer in the country with 15 goals as the Purple and Whites won the league by a mile ahead of Gent. The boy who played like a chiselled veteran was still only 16 years of age.

Nevertheless, he quickly became the fulcrum of Jacobs's side. Against Athens I watched him fight a brutal battle with the Greek side's central defenders Kostas Manolas and Cristian Nasuti, sometimes tussling for possession without a team-mate within 40 yards. He took kick after kick without ever once complaining and improved as the game went on, hitting the post and firing inches over in the closing stages as he fruitlessly sought a winner.

Yannick Ferrera, a former Anderlecht youth coach who has known Lukaku since he was 13 and used to give his protégé individually-tailored sessions, says it is the young man's attitude as well as his stature which helps to set him apart from his peers.

"Romelu has good people around him and a very good temperament," Ferrera told me. "He knows what he wants - it is to become one of the best strikers in the world and to play at the very highest level.

"Already, even at such a young age, Romelu can have all the cheques he wants, all the clothes he wants. He can have everything, that's not a problem for him. But now he wants to become a great footballer and that's good because it comes from his head.

"Even when I met him four years ago he was a leader of his team. He was obviously the strongest and the biggest in his age group but he always led by example and he always wanted to learn, something which is still the case today.

"I get more excited by him every time I see him play. I remember the first time he played with the first team - I felt real pride because I'd helped him to get there. I was really happy for him because he deserved it, he worked so hard. He's not a guy who thinks he's the best and doesn't have to try. He wants to work hard to get even better every single day."

Named Romelu after his father, Ro-ger Me-nama Lu-kaku, it is the striker's close relationship with his dad, himself a former professional footballer who played for several Belgian sides, that has been credited with keeping his feet firmly on the floor in the face of such early acclaim for his ability.

Madrid manager Jose Mourinho, a confirmed Lukaku admirer, has even praised his father's influence. "It is true we wanted Romelu, but he has a very clever dad," said the shrewd Mourinho in an interview in October. "He wants Romelu to stay at Anderlecht for one more year. I wish all dads were like this."

Whoever you speak to, they have only praise for Lukaku, both as a person and a player. "He is simply brilliant, as a human being and as a footballer," his Anderlecht and Belgium team-mate Silvio Proto told me.

Lukaku will leave Anderlecht one day and a great career lies in store, but in his homeland, they are hoping he can spearhead the Belgium attack for the next 15 years. It is a national team which appears to be entering a brave new world, with the likes of Eden Hazard, Steven Defour, Thomas Vermaelen, Vincent Kompany, Axel Witsel and Marouane Fellaini all establishing themselves on the international stage at the same time.

Proto, who is his country's resident number one goalkeeper, is excited about what the future holds. "It is very important we reach a major championship, because the 2002 World Cup was the last time and that is too long ago," he said. "At this moment, Belgium have a good generation of football players and we are working very hard to form a solid national team.

"Smaller countries like Belgium are finally investing in the education of professional football players. Before, Belgian clubs bought foreign players. But there is no money now and that is why, especially at Anderlecht, the club is investing in the youth academy. Lukaku is the first player to emerge from that system, but others will follow."

Follow, they surely will. In the Anderlecht youth team, there is another youngster creating waves with his mature performances, with some speculating that the 16-year-old will make his debut for the club's first team before the end of the season.