Messi and Ronaldo, rivals in greatness

If Lionel Messi and Cristiano Ronaldo wanted to lay down markers ahead of the Barcelona v Real Madrid showdown at the Camp Nou on Monday, scoring hat-tricks in their final La Liga games before El Clasico was a typically sublime way to go about it.

Messi and Ronaldo are the two best players on the planet right now. They play weekly at a level most can only dream of, consistently overshadowing the abundance of world-class players who line up as their team-mates and opponents alike.

They are the last two winners of the Fifa World Footballer of the Year award and, despite being far from stereotypical centre-forwards in a positional sense, have each won a European Golden Shoe prize in the last three years. They have scored 27 La Liga goals between them already this term - four more than the next top scorers in the division, Villarreal.

"What more can you say about Messi?" asked Barca colleague and Spain's World Cup-winning goalscorer Andres Iniesta in the aftermath of Messi's eighth treble for the Catalan club, in an 8-0 destruction of Almeria last weekend. "There are no words left. Let's hope he continues as he is."

After firing in three more goals in Real's 5-1 drubbing of Athletic Bilbao on the same day to stay one clear of his rival in the race for the Pichichi (Spain's top goalscorer), Ronaldo preferred to do his own talking: "I'm very happy for scoring three goals, but the important thing is that we continue being leaders. Barcelona's 8-0 win at Almeria doesn't tell me anything, Let's see if they score eight goals against us on Monday." 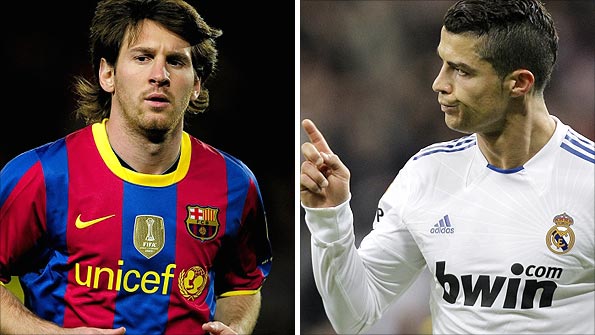 Monday is the day when Spain's top two meet for the first time this season, with Real Madrid a single point ahead of Barcelona in the standings. It is a game customarily filled with intrigue and the pre-match phoney war will be taken to new levels this time around with Barca's arch-nemesis Jose Mourinho overseeing his first Clasico in charge of Real.

But when the talking stops and referee Eduaro Gonzalez blows his whistle at 2000 GMT, the focus will then centre around Messi and Ronaldo - the two proxy leaders of their teams, the men who are almost certain to have the greatest impact on the result and, longer term, the destiny of the Spanish title.

So much has been written about them both before, these two fascinatingly contrary figures: Messi, the shy, formerly-fragile boy from Argentina who packed his bags aged 13 and put himself in Barcelona's care; and Ronaldo, the perma-tanned Portuguese with the perfect physique and arrogance to match his £80m attributes.

Perhaps it is because they are so unique, as far removed from each other as they are from the mere mortals who seek to attain their greatness, that they are so open to comparison. It is a point Noe Pamarot made to me when I asked the well-travelled Hercules defender to compare two players he has done battle with in La Liga in the past three months.

"The stats are amazing for both of them, it is incredible how many goals they score," said Pamarot, who also played against Ronaldo six times during a five-year spell in English football playing for Tottenham and Portsmouth.

"But they don't play anything like each other. They have both got the speed and the skills, but for me, Messi plays only for the team and that makes him a more dangerous opponent. He isn't always looking to score himself - if he isn't scoring, he is making an assist or having a big influence on the game anyway.

"They are comfortably the world's best right now. But Messi is very, very special. He is starting to prove weekly he is on a different level to everyone else. Can he be the greatest of all time? If he carries on like this for some more years, he can end up the same or even better than Diego Maradona and Pele. Why not?"

Pamarot's thoughts cast my mind back to a study of the pair conducted by the University of Coruna in Spain in April. It found that more than 80% of Barcelona's passing moves involved Messi, compared to 60% with Ronaldo and Madrid. When Messi gets the ball, his only thought is getting it into the back of his opponents' net; when Ronaldo picks it up, his is to put it there himself.

At a time when the fluid passing and movement style of Spain and Barcelona is fashionable and everyone wants to watch tiki-taka, Ronaldo's fearsome power and single-minded selfishness when he is within sight of goal is, to some, considered an inferior alternative, aesthetically-speaking anyway.

Another player who has been on the receiving end of the genius of Messi and Ronaldo is Ivory Coast midfielder Didier Zokora. The 29-year-old played against Ronaldo five times in his three-year stint with Spurs and was in the Sevilla team that suffered a 5-0 defeat at Barcelona a month ago in which Messi scored twice. 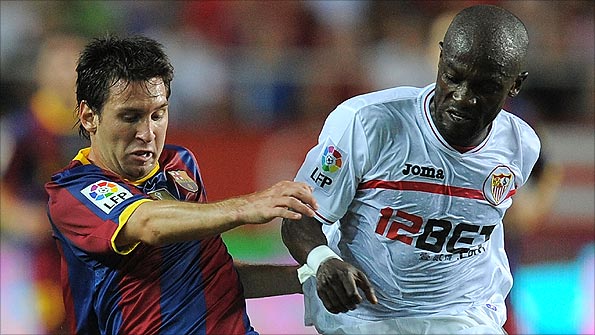 Zokora challenges Messi during a game in Seville in August. Photo: Getty Images

"The two of them are very good, for sure, but I prefer Messi," said Zokora. "Messi is perfect in the art of dribbling, while Ronaldo's shot is incredible. It is very difficult to stop them, they are very, very fast. Could one of them go on and be the greatest? It is difficult to say it, but maybe..."

For now, it is far easier to let the numbers do the talking. Courtesy of Infostrada Sports, here are the pair's breathtaking goal tallies in black and white:

Chalk and cheese they may well be, but in the prolific way they find the net these men - who rarely play as out-and-out strikers - do at least have something in common. And according to the University of Coruna's study, that's not all. They also believe Messi and Ronaldo to be the two fastest players in the history of the game in terms of running with the ball.

So who do you pity more ahead of the game the whole footballing world will be watching, the Barcelona backline or the Real Madrid rearguard? I asked Pamarot who it is easier to play against, and he laughed down the telephone at me. "Haha. Seriously? OK, I want to play against both because they are the ultimate test of your abilities."

Plaudits from pundits and their peers have not been in short supply as the build-up to the most talked-about domestic fixture on Earth grows ever closer. "It is clear to me, Cristiano is number one," said Mourinho. After watching Barca and Messi rip apart his Panathinaikoas side in Europe on Wednesday, midfielder Luis Garcia purred: "Messi is a phenomenon. One can only enjoy his play. Such a player only comes by once in several decades."

Even the Spanish prime minister Jose Luis Rodriguez Zapatero has got involved in the debate, claiming he prefers the "dribbles" of Messi to the playing style of Ronaldo, though his opinion should be taken with the caveat that the 50-year-old is a lifelong Barcelona fan.

On Monday, these two footballing phenomena go head-to-head before an expectant audience of about 98,000 people in Barcelona and tens of millions more on television around the world. They will both feel they have an extra point to prove, too: in seven games, Messi has never scored or had an assist against a Mourinho team; similarly in five, Ronaldo has never found the net against Barca.

With the likes of Maradona, Pele and Johan Cruyff all reaching the peak of their powers in different eras, perhaps we should be grateful that for this generation, the stars will collide in front of our very eyes.

There will be a live text commentary of Barcelona v Real Madrid on the BBC Sport website, starting at 1900 GMT on Monday.