A day after Real Madrid and AC Milan meet in the salubrious surrounds of the Santiago Bernabeu, one of the Spanish giants' favourite sons will don his Champions League boots for the 133rd time. But rather than turning out in the brilliant white of Real, this time he will be wearing another team's colours.

When Germans Schalke play host to Hapoel Tel-Aviv on Wednesday, they will be relying on the legendary figure of Raul Gonzalez Blanco, the tournament's record appearance-maker and goalscorer (66) to kick-start their so far sluggish season.

For Raul, playing in a struggling side is not something he is accustomed to; this, after all, is a man who can lay claim to one of the most glittering CVs in club football. Since winning La Liga in his first season in the Real team in 1994-95, he has added six more league titles, three Champions Leagues, two Intercontinental Cups, one European Super Cup and two Pichichi awards for top scorer in La Liga.

Yet after 16 years as a Real icon, in the summer the 33-year-old decided to up sticks and spend the denouement to his record-breaking career in the Bundesliga, signing a two-year contract with Schalke and risking his reputation in arguably the most competitive league in Europe.

Granted an interview with the man still referred to as 'El Angel del Madrid' in his birthplace, I asked Raul to explain how he had ended up in Gelsenkirchen, the so-called 'city of a thousand fires'. "I came to Schalke because the manager Felix Magath convinced me," he said matter-of-factly.

"He's a very good coach and I like his philosophy. During our discussions I got the feeling he really wanted to sign me and sensing this trust is extremely important."

That belief has already been tested after a brutal baptism of fire in the Bundesliga for Raul, who saw David Villa draw level with him on a record 44 goals for the Spanish national team last week.

Ten games into his Schalke career, the highest scorer in Real Madrid's history with 323 goals has only a solitary strike, against Borussia Moenchengladbach, to show for his efforts, with the Royal Blues languishing one point off the bottom of the league.

But there is no doubt in Raul's mind he made the right decision. "It's obviously a totally new experience for me - a new club, a new country, a new league," he told me. "But I made a very conscious decision because I wanted to play abroad after Real.

"The Bundesliga is a very strong league and there are no easy games here. Just look at Mainz - they are a really young team who are causing a sensation and they went away and won at reigning champions Bayern Munich. That's what makes the league so fascinating.

"You've then got the superb stadia and the atmosphere too. The grounds are always full and the noise is superb, the fans are incredible and we get fantastic support whether we are at home or away."

I get the sense from Raul that a feeling of belonging, of being happy at Schalke is almost as key to him as the on-pitch success to which he eventually hopes to lead his new team.

After all, this is a man who was granted a news conference to announce he was leaving Real in July. With tears in his eyes he walked around the Bernabeu one last time and bade the club he had served for so long, and with such distinction, a final farewell.

President Florentino Perez, so fond of a 'Galactico' he would surely have bought Raul had the club not taken him in as a 15-year-old, summed up the feelings of most Madridistas: "There are a lot of men who are part of the history of Real Madrid. Raul has earned his place in the club's history with his tireless work and his infinite love and support for everything that's Real Madrid.

"I hope that all the players who will join Real Madrid in the future fit the legacy that Raul has left behind at this team. Raul represents everything that this club's about. He perfectly represents the spirit of Real Madrid."

All of which underlines the risk Raul was taking in prolonging his career away from a club he had become so inextricably linked to. He admits he had to think about the move for a long time before committing to Magath's vision, while some of Europe's most ambitious clubs circled the striker like vultures.

Tottenham were mooted to be especially keen, but Schalke were always at the top of Raul's list. "I felt it would be an important experience to get to know a new country, a new culture and a new mentality," he explains. "My family and I gave it a lot of thought and we are keen to sample everything that's new about life in Germany.

"I feel very much at home at the club, the people here are very attentive and very open and I like that. My family and I have settled very well, we have been made to feel welcome everywhere so far."

In fact, the only thing missing in the latest chapter of his story is a winning football team. It appeared as though Raul was hinting at a fairytale finale when he produced a moment of sublime magic to scoop a shot into the Bayern net in a pre-season friendly, but so far that has been a rare highlight of his spell at the Veltins-Arena. 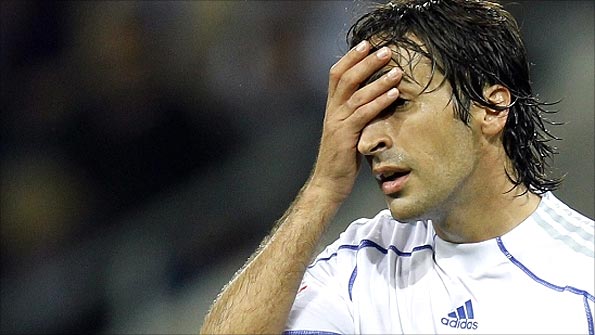 Raul has not had much to celebrate during his time at Schalke thus far. Photo: Reuters

Schalke finished second last season, the fourth time in 10 campaigns they have been frustrated runners-up, but in the summer Magath ordered a complete overhaul of the playing staff.

Fifteen players were shown the exit door, including defender Heiko Westermann and striker Kevin Kuranyi, while 14 new ones came in, with Raul joined by, among others, German centre-back Christoph Metzelder, Spanish midfielder Jose Manuel Jurado and Dutch forward Klaas-Jan Huntelaar.

Until now Magath's revamp has failed to produce positive results, but this is a coach who won two German league and cup Doubles in his time as Bayern boss and led Wolfsburg to their maiden Bundesliga in 2009, so perhaps Raul - who saw his manager change 17 times in 16 years at Real - is right to give his new boss a chance.

"Schalke have been waiting a long time to win the league [1958, before the Bundesliga was formed] and it would obviously be great if we could do it," he says. "But we have to take each game as it comes.

"We've made a bad start in the league and we need to make up ground as quickly as possible on the teams above us in the table. But things are improving on the pitch and we have a very good coach, so we will continue to get better."

Despite their stuttering start, Raul is clearly proud of the new path he has chosen for his career. In fact the only thing he is not that interested in talking about is Real Madrid, but having spent half his life as a symbol of one of the world's biggest clubs, you can forgive him for wanting to distance himself from his old employers.

He admits he keeps "in touch with what is happening at Real, of course", but says he is not "giving any thought to [manager] Jose Mourinho and his work". I ask him if Mourinho is the man to end Barcelona's period of dominance in La Liga. "I couldn't tell you. I'm totally focused on the Bundesliga," comes the now half-expected reply.

Even over a short interview, it is easy to see why Raul has a reputation as one of the most consummate professionals of his generation. Whether the Spaniard's Schalke sojourn is a success or a failure there is no doubt he will give it his heart and soul, as he has done at the highest level for more than a decade-and-a-half.

There aren't many players who have been dubbed the 'best player in the world' by Manchester United boss Sir Alex Ferguson, as Raul was after masterminding a 3-1 win for Real in 2003. One should not forget that that particular game also featured the stellar talents of Zinedine Zidane, Luis Figo and the Brazilian Ronaldo.

But then footballers like Raul don't come along very often. We should enjoy watching him before he hangs up those legendary boots for good.