Prophetic Murray accepts he is not amongst clay-court elite

Andy Murray got it right when he said the French Open semi-finals would feature the four best clay-court players in the world.

David Ferrer may be six in the rankings but he's a clear notch above Murray on the crushed brick red stuff. With five years more experience, and a game style so demoralising and exhausting to compete against, it's hard to deny the Spaniard a first Roland Garros semi-final.

Murray may get his chance in the future against 30-year-old Ferrer, a man who is respected and admired throughout the locker rooms of the world, but, as things stand, you have to say he did well to stretch his four-set defeat out to three hours and 45 minutes.

Remember Murray has only beaten one top-10 player on the dirt - Nikolay Davydenko in Monte Carlo a couple of years back - so winning this one was always a long shot. When he made the semis a year ago he had to beat Juan Ignacio Chela in the last eight. Ferrer would beat Chela 6-3 6-2 6-1 or something similar.

The match was enjoyable, albeit a bit random at times, with serve refusing to dominate for extended periods. This was a contest which enthralled the crowd on Court Suzanne Lenglen either side of a half hour rain delay. 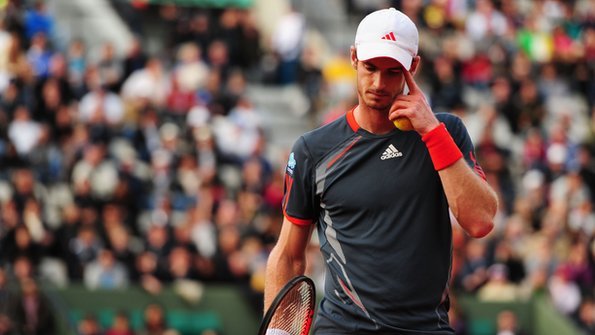 I liked the way Murray played. He hit with good depth throughout and many of his backhand returns seemed to trap Ferrer in his backhand corner. The way he hit through his forehand was reminiscent of those fine matches he played in Australia.

In the fourth set, much was missing but at least he was sticking to his game plan. Had he converted one of the two break points which came his way in the seventh game, he could have extended the match.

The world number four's problem was holding serve. He lost five of his last six service games, was broken 10 times in all, and five times he lost serve immediately after breaking.

Ferrer returned exceptionally well and Murray, try as he might, seemed unable to force the ball through the heavy conditions with his first delivery. As a result, Ferrer got fully stuck into most Murray service games, using his speed and court craft to full effect, and by my scorecard's reckoning, Murray only had one love service hold in the entire match.

Considering he was only a few points from retiring in the second round, the British number one must take heart from the way he tested such a good player in a major quarter-final.

He now faces a heart-to-heart with his coaching team to decide how best to prepare for Wimbledon. He wants to do a block of physical training to get in perfect shape for the big one and was non-committal when asked if he could confirm his appearance at Queen's next week.

The French Open is a continuing puzzle for Murray. There are simply more players who can beat him on the surface and, if he's honest, when he saw Ferrer and Rafael Nadal in his half of the draw, he suspected a title challenge was unlikely to be in 2012.

He's not a member of the top five on clay and is he even in the top seven? Results and logic suggests Ferrer and Juan Martin del Potro are ahead of him, with Nicolas Almagro and Tomas Berdych pushing him hard.

But as he rightly points out, he would have given Gaston Gaudio, the 2004 champion, a good match. (Let's be honest, Tim Henman would have beaten Gaudio if he'd got past Guillermo Coria in his epic semi-final of eight years ago.)

But, as it is stands, Murray continues to wait for the day a second-week Grand Slam draw opens up invitingly.

The reality is, in this super-strong era, the finest players are delivering time and time again. On other surfaces that means Novak Djokovic, Roger Federer, Nadal and Murray. On clay, that means Djokovic, Nadal, Federer and Ferrer.