As they say in football or rugby, he simply had to go.

David Nalbandian left the ATP officials with no choice but to issue an instant 'red card', or at least the tennis equivalent - a default - after injuring a line judge in the dramatic end to the Queen's final.

He didn't mean it and admitted his mistake - an instinctive action of fury and frustration - but the vicious assault on the advertising hoarding and the inevitable impact on the line judge, who was struck on the leg at point blank range, was indefensible.

How can anyone draw blood from an official and expect to stay on the field of play?

The board, which he didn't just kick but belted into next week, was directly in front of the line judge's chair. Nalbandian was facing the official and surely knew his proximity when he lashed out. 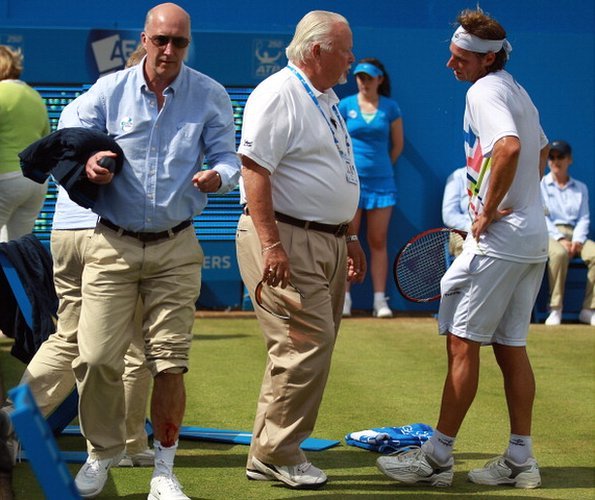 He didn't mean to injure him, of course, but it was the height of stupidity.

The look on the face of the line judge, who received on-site treatment but no stitches, reflected the general feeling. It was a look, first and foremost, of utter disbelief.

The tournament and the ATP got it absolutely right. Default was the only option.

You can't change the rules just because it's a high-profile final on terrestrial television, or because important corporates are being entertained, with thousands more paying big money for their sought-after tickets.

The up-market crowd were booing and stamping because they wanted more entertainment but it was hardly a protest to be taken seriously. This wasn't an exhibition.
Many hadn't even seen the incident, certainly not up close, and I suspect many others didn't actually know why they were booing.

But off they went with their Sloaney revolt.

They were booing Chris Kermode the tournament director, who had no involvement in the decision, and booing the ground staff for bringing on the trophy, when they would normally be complimented on the annual excellence of the courts.

Goodness, they even booed Sue Barker. "Shh, shh, shh," she said into the microphone, finally settling them down.

In fairness to the crowd, most were oblivious to the severity of the incident. ATP rules had to be enforced and perhaps this should have been conveyed in a louder and more forceful manner over the PA system.

His apology on court had been tarnished by an ill-advised rant at the ATP for having too many rules and, even an hour and a half later, he was still inserting "but" into every answer.

Yes, it was a mistake. But sometimes you get angry.

Yes, it was a mistake. But look at all the rules the players have to sign up to. Too many rules.

Yes, it was a mistake. But when it happens somewhere else nothing happens.

Swearing and racquet throwing, dangerous surfaces, pressure on the players. He was talking about this, that and everything.

It was a poor attempt at introducing mitigating circumstances to a self-confessed error of judgement.

Lost in all the drama was the actual champion. Congratulations Marin Cilic, you deserved the title and didn't deserve to be booed for it.

The Croatian played some terrific tennis, recovering well after Nalbandian's strong start, and looked to be on course for a comeback victory when the match was stopped.

Although in good spirits afterwards, it was hard not to feel sorry for him. He didn't get a match-point moment to celebrate and his victory ceremony, one of the moments of his career, was tarnished by the crowd over-reaction.

Sadly, as night fell, the talk of the Queen's terrace was not of a worthy champion, but of the rebel runner-up and the dramatic drawing of blood on the lawns.