Victoria Azarenka strides into the room with her usual confident air.

It's a room full of chairs and spotlights, a desk and a microphone at the front, where the players come for post-match press conferences. It's designed for more than the four of us.

The tall 22-year-old is taken aback. Instead of 20 or 30 middle-aged hacks ready to fire questions, there's me and the guy from the Palm Desert Bugle. Linda, the stenographer, is ready to transcribe for the benefit of folk off doing other things.

While some superstars would get a bit offended, Azarenka simply laughs, pulls out her mobile phone and takes a snap which she later posts to twitter. We all laugh. She is a very normal person who likes a giggle, a dance, and the odd game of tennis.

Two days earlier, our meeting was in the players lounge at Indian Wells. Fresh from a pummelling of Agnieska Radwanska, supposedly one of her nearest rivals, Azarenka was unsurprisingly in a jolly mood. She wanted to talk about the Olympics, the English accent, this and that. Eye contact throughout. No clock watching or agent loitering. 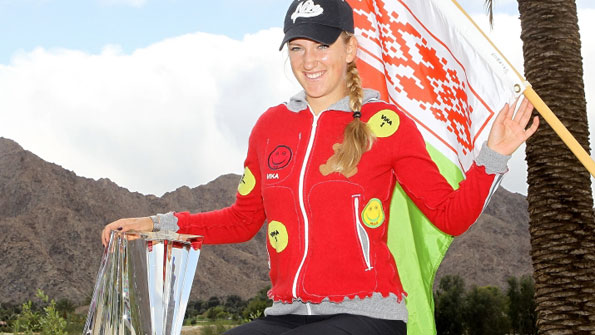 Her agent is actually a former player, Meilen Tu, and a close-knit team including coach Sam Sumyk, fitness guru Mike Guevara and physio Jean Pierre Bruyere, who previously worked with both Tim Henman and Andy Murray, is rightly thanked publicly every time she wins a title.

Which is quite often right now.

What a start to the season with four back-to-back titles and 23 match wins. It's the best start to a season since Martina Hingis in 1997 and it's thanks to a brutal backhand and a much improved forehand. Depth and accuracy. Consistency.

Having worn a series of T-Shirts with cryptic logos throughout the California tournament, Azarenka paraded after the final a slogan which needed no interpretation: "Unstoppable".

That's what it feels like. Who is there to stop her? Certainly not Radwanska; certainly not Sharapova on the evidence of the finals in Melbourne and Indian Wells; perhaps Petra Kvitova? Maybe when Serena Williams returns? The challengers are hardly queuing up.

I put it to Azarenka that she looks and sounds comfortable with the world number one ranking. She appears set to stay there for some time.

"Well it doesn't hurt to be number one!" she tells BBC Sport. "But there is more responsibility and motivation for the other players to beat you."

"I've got to stay humble and stay on my feet and keep doing what I did to get to number one".

The obvious thing to assume with Azarenka is that her breakthrough win in Melbourne, her first Grand Slam title, has given her confidence to dominate the way she is. She laughs and tries to explain.

"I think confidence is overrated! Everybody says, 'You're winning on confidence', but it is invisible, you cannot play with it, it's not something you can control. How do you use it?"

So does she believe in pressure, another great abstract element to sport?

"Pressure is something that is also overrated! You can bring it on yourself, somebody can say a few things and you feel pressure.

"For me the best word is adaptation. You adapt to any situation, you adapt to dealing with pressure, confidence, your opponent. You adapt, you try to be better. That is the most appropriate word at this level."

For all her qualities, Azarenka is not without her detractors. Some don't like the finger wagging celebration, others feel she makes a meal of things on the court. And, of course, there's the shrieking/grunting.

Questions about the issue were curtailed by WTA officials this week, on the presumption that the subject has been firmly put to bed. Far from it. It remains a live issue, even at the tour's top table.

On the morning of the Indian Wells final, the organisers were stating their opposition to the noise - not just from Azarenka but Sharapova too. And crucially Steve Simon, the BNP Paribas Open tournament director, who sits on the board of the WTA, revealed that the issue is "on every agenda".

Over breakfast with visiting reporters, Simon told us: "It's pretty hard to tell somebody at this point, 'You can't grunt any more.' This isn't new. I think if you ever did put it in [the rules, not to grunt] you'd have to start it down in challengers and satellites and slowly work it in."

Is it a subject of debate on the board? "Oh yeah. It's on every agenda. We sit there and have this conversation."

Honestly? It doesn't bother me that much. I think anyone who turns up to the tennis everyday becomes immune to it. But I know it puts people off coming to watch players like Azarenka which is a huge shame. The Australian Open women's final this year wasn't a sell out. This is where the sport has a problem.

But, as Azarenka constantly says, she's done it since the age of eight. It happens naturally. She says she can't stop it.

The casual fan may be struggling to warm to the Belarusian but those who study the game, and certainly study the form, can put the noise to one side and just admire the ongoing achievements of the "unstoppable" Victoria Azarenka.