The changing times of the Davis Cup

During our recent 5 Live tennis coverage, you may have heard an entertaining tale from 80 years ago which perfectly illustrates how the status of the Davis Cup has changed over the decades.

Sidney Wood was awarded the title by walkover after his scheduled opponent, Frank Shields, pulled out through injury.

Except that's not exactly true.

Shields was actually instructed to pull out by the United States Tennis Association because they were keen to rest him ahead of an important Davis Cup match with Britain the following week.

Shields, who was one of the actress Brooke Shields's grandfathers, did actually pick up an injury during his Wimbledon semi-final.

But, according to the late Wood's recently-published memoirs, it wasn't severe enough to rule Shields out of the final, and he wanted to play.

He was basically rested for Davis Cup duty by being pulled out of the Wimbledon final! 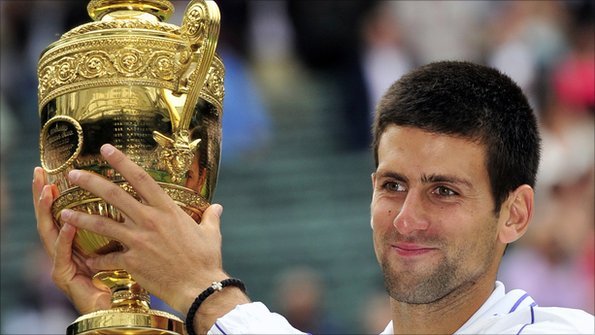 The Davis Cup is a proud and historic competition. Ties have unique atmospheres and generate some of the best noise and competition in tennis.

In Austin, Texas, where the United States meet Spain in a quarter-final, nothing else will matter. The Americans will bond together and "play for the flag". They will commit to the tie as royally as Frank Shield, his team-mates and his USTA governors.

But Rafa Nadal won't be there for Spain. Like Roger Federer and many other top players, Nadal picks and chooses his ties.

And this one has come too soon after his crushing loss to Novak Djokovic at SW19 and the foot injury he picked up on his way to the final.

For Andy Murray, the Davis Cup has marginally beaten fantasy football in his priority list over the last two years.

Finding the strength of mind to carry a British team through a relatively insignificant weekend - at home to Luxembourg in Glasgow - is almost as tough as dragging his aching body through it.

Murray's hip flexor was giving him grief in his last two matches at Wimbledon and, ideally, he would rest for a couple of weeks before heading out to the American hard courts ahead of the US Open.

Yet these are not normal circumstances, this being the politically confused sport of tennis.

The Davis Cup has to fit in around the ATP World Tour and the Grand Slams. It needs to jump into the rest weeks and poke its nose into any slight gap in the players' relentless schedules.

Asking the stars to come out for best-of-five set tennis the week after Wimbledon is hardly conducive to a happy tennis family, although it is important to note that the players actually voted for these weeks.

Unlike Nadal, and his uncharacteristic outburst during Wimbledon, Murray is not complaining about the schedule though.

"It's not the weeks, it's never been the weeks," he said, "A few things happened which I didn't enjoy that much [with the previous Davis Cup regime]. They've been sorted out, but it took a while."

His cryptic comments will raise eyebrows and will recall events in Liverpool two years ago when he fell out with his then captain John Lloyd about whether he was fit to play against Poland.

The pair then clashed again when Britain lost to Lithuania last year and Lloyd pointed the finger at a perceived part-time commitment from Murray.

Lloyd has since been replaced by Murray's former junior coach Leon Smith.

Ahead of his first tie since that fateful Liverpool match, Murray arrived in Glasgow on Sunday night, earlier than expected, and says he's been enjoying the team spirit and practice sessions.

"I like playing for my country, always have done," he said. "I'm sure I'll play a bit more in future ties."

Whether he'd still be playing if the rules for Olympic qualification were different is a matter for debate though. He needs to receive an official on-site team nomination twice in the Olympic cycle to be eligible for London 2012.

One day he'd love to win the Davis Cup for Britain but without any sign of world class back-up in the backwaters of Euro Africa Zone Two that dream is distant.

The sport isn't played like it was in Sidney Wood and Frank Shields's day. It is faster, harder, more punishing, more brutal on the body.

But more than that, it is more mentally gruelling. It's no longer a game played by friends on lawns for prizes of picnic hampers. With soaring prize money and reputations resting on every rivalry - not to mention the intensity surrounding every big match-up - the
top players are usually shot to pieces by the end of a major fortnight.

The Davis Cup is a magnificent thing to win, as Novak Djokovic proved for Serbia with their spectacular triumph earlier this year, and it also helps bring funding and international competition to virtually every nation on the plant (tennis is the second most popular sport in terms of nations competing globally).

But the whole thing needs a radical rethink, way beyond moving forward the final by two weeks (which the ITF has announced for 2012 and 2013).

Exactly one week after playing the world number one on Wimbledon's centre court, Murray plays someone without a world ranking, Laurent Bram, at an area attached to a shopping centre in the west of Glasgow (just past the food court, in case you are looking).

On the one hand it emphasises the beauty of the competition, but on the other it exposes extreme silliness.

Murray's life is completely devoted to winning a major singles championship and, despite his upbeat comments here, playing best-of-five set tennis on a non-Grand Slam surface, having moved from grass to indoor hard in the space of a week, doesn't feature as
perfect prep.

Meanwhile Nadal goes fishing off the Majorcan coast as Spain takes on the USA thousands of miles away.

And before you ask, I don't have the perfect solution. But between us - as tennis fans - I bet we could come up with ten good concepts which could ensure player participation, fit within the calendar, and re-energise the competition.

The tricky thing would then be convincing the powers that be...