What's so complicated about coaching a national team?

So, Andy Robinson has quit. I was one of the people who called for him to be appointed and it makes me sad.

My reaction is that the fundamental role of national coach needs to be re-examined in Scotland.

And, at the outset of this piece, I have to say in Andy Robinson's defence that some of that rubbish on Saturday wasn't his fault, it was players buying dummies, players going high into contact, players seemingly unable to break a defence and players missing kicks.

What's more, they will have learned to do this under other coaches, probably since they were five years old.

He was let down by his players on Scottish soil. 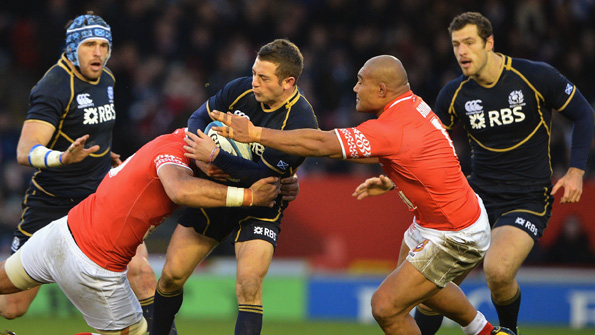 Greig Laidlaw finds progress tough against Tonga, who secured their first win over Scotland at Aberdeen on Saturday. Photo: Getty

Oh, there were stories that his schoolteacher attitude wound a few of them up, and he had a sharp tongue, but that's a good coach who has walked away.

You won't find players saying he was a bad coach. He was, in fact, very probably the best forwards coach in the business.

I'd like him to stay in Scottish rugby, coaching those detailed aspects of forward play, but that won't happen.

But here's the main thrust about this piece today: I don't see what's so complicated about coaching a national team.

For 40-odd weeks of the year your players are being fed, coached, trained and lectured by some of the best coaches in the world at English, Scottish and French clubs.

The players at your disposal dovetail with their club systems. They have their weight-training programmes, their defensive systems, their attack systems, their set-piece plays.

Surely the job of a national coach must be to give the players two attack systems and allow them to work out the rest themselves.

The role of a national coach is to organise and with the minimum of fuss. There should be no smoke and mirrors, no promises of some rugby nirvana, no interminable meetings and talking.

And no talk of winning the next World Cup with a golden generation of players. There is no such thing as rugby talent, there is only success brought on by working hard.

And there is no golden generation. Kiwi players, and for that matter Tongan players, work hard at their rugby in a school of hard knocks.

A national coach needs to hammer home set-piece practice, shape practice, a few calls, make sure fitness isn't lost, and get blasted in. Keep it simple.

The problem with that display on Saturday was that the players looked as though they hadn't even been introduced at times. The attacking shape broke down in its complexity and certainly rarely threatened.

And that will be nagging at Robinson. It's the same "same way" system as was used on the Southern Hemisphere tour and it had success there, but not here.

Let's go through what we do know. New Zealand and South Africa are better teams than us, Samoa beat Wales and nearly beat France. Argentina beat Wales. South Africa and Australia beat England.

The power base of world rugby is shifting from nice boys in the Northern Hemisphere to a more brutal Southern Hemisphere game laden with skill and power that we aren't matching. Just how we approach that I don't know.

I just think the whole role of national coach, both in rugby and in football, needs to be re-examined, especially here in Scotland. The players are not the produce of the national coach. There is no long-term planning by the national coach. He takes players who are coached by someone else and moulds them into a national framework for a handful of games a year.

He doesn't need a caravan of helpers large enough to accompany Marco Polo.

In fact, the players don't need to be in camp all this time. I remember Judy Murray telling me that Andy Murray's Olympics success came from Ivan Lendl's advice that you prepare for a Wimbledon final or an Olympic final in the same way that you have prepared for every other game in your life.

Out went the special preparation, the bigger hotels, the bigger team, and he won a gold medal and the US Open.

You change precisely nothing.

I do understand the logic behind Edinburgh and Glasgow playing the Robinson way and I do get that element of the influence the national coach might have.

But only eight of the starting 15 against Tonga play for Edinburgh or Glasgow.

I hope the SRU pares down the national coaching set-up and gets a proven organiser.

Who would you like to see as Scotland coach?