We are beginning to share a problem with our football colleagues which is that a lack of team sports for youngsters is having an impact on the number of wins in both codes of football.

Frank Hadden copped it, Matt Williams copped it, Andy Robinson is copping it.

If they'd coached the All Blacks their records would have been different. 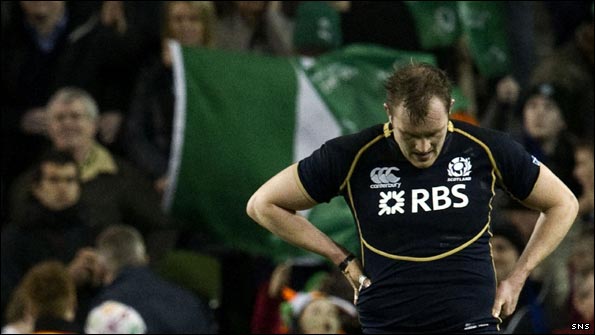 The game first: Ireland's players and simple structure were better than ours.

I had hoped Scotland would start with the same plan which got them across the gain line against Wales and France - namely more one pass rugby.

Instead, early possession was spun through Greig Laidlaw and Mike Blair as interchangeable half-backs to wider channels.

It didn't work. And our scrum was under pressure, and it's time to give Jon Welsh a run.

Right that's enough about the game as it is upsetting me.

Apart from the fact that the last three games had been winnable - which showed extraordinary application and effort from our players - some of whom, like Richie Gray and David Denton are world class.

Where the heck are we? It's a bigger picture.

I actually don't see the problem as an international coaching puzzle.

Oh it will exercise the bloggers and the writers, but does a creaky scrum or a squint throw or a missed tackle at the Aviva stadium actually reflect on any in-situ coaching team?

What we see in blue jerseys are products of our country. Well, apart from Hamilton, Denton, Evans and Lamont who were nurtured abroad.

Our players learn their skills in the mud, they come from a tiny pool of talent, they realise early on that they can get in a top team without trying hard.

Occasionally there are magnificent wins, but we are where we are.

To cure this we need to sort three areas. Let's go top-down.

You have to ensure that your coaching and backroom talent at international level are first class.

And I reckon that coaching at that level is little more than a game plan. Coaches at the top level get sacked because they all lose a key game eventually.

Beneath that your coaches at professional level need to be up to date, innovative, motivating, and have at their disposal techniques and knowledge that is at least as good as that of their rivals.

I will comment on any movement at Glasgow when it's official. But there should be a constant turnover of coaching staff and a spread of knowledge.

Lastly, you have to have an amateur and school game that's bustling with talent and teams and drive and passion and ambition and feedback - and all the words you and I know we could write down to describe a perfect grassroots environment.

And do we have that? No.

So the fix is a ten-year one. Pay PE teachers to take school rugby teams from as wide a player base as possible.

Sorry but the quick fix isn't a fix.