Time for the search for new talent to begin

Oh dear, sometimes blogs are fun to write. But occasionally I have to take a deep swallow, pick up my quill, inhale sharply, gather my thoughts and, after a couple of hours of hard thinking, get it down on paper.

It's time for Scotland to blood a new generation.

Easy bit to say: David Denton is a find, Ross Rennie had a magnificent game apart from one bit of dodgy distribution that a rugby league player would have ensured resulted in a try, Richie Gray and Jim Hamilton were at the heart of a pack that, apart from at scrum time, won their personal battles, and one crazy exit strategy from the team resulted in a charge-down kick and the game being lost. 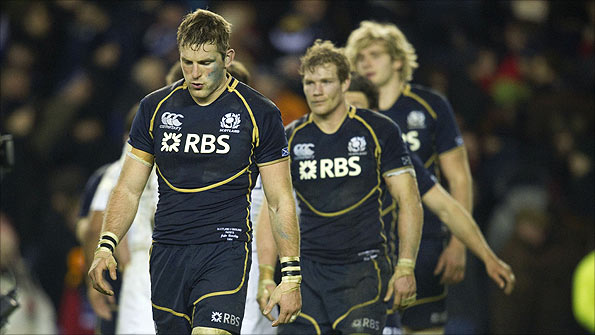 Aside from that score, neither side looked capable of crossing the other's try line. Scotland's attacked and dominated but couldn't score a try.

So to the difficult topic, which is the coach Andy Robinson. I think Andy's a proud man with a tough mind. He's also a fantastic coach who took Edinburgh to second in the then Magners League and he has engineered wins over Argentina (away twice) and both South Africa and Australia.

But he must look at the way the team isn't scoring tries despite bossing games - in this weekend's game it was against England - and wonder what's happening.

Here's where I think Andy Robinson is different too; if the Scotland team has another bad Six Nations tournament he will walk. I just don't see him as the kind of bloke to stick around and hang in for four more salaried years at Murrayfield.

Robinson could transform any English club.

I always think these things are fairly simple. You lose games either because your systems, selections and practices aren't right, which is the fault of those coaching, or because the players aren't up to it which is to do with player gene pool and the coaching and training those players have had since they were seven years old.

So - do we have the players? It's hard to tell, but most of the Scottish players hold down places in top teams and yet, I know, that we don't have many players who would get into a world team.

Perhaps the fairest thing to say is that we have some functional players who, while never matching the All Blacks, have pulled off some remarkable wins.

Selection? I'm not sure that was right and you'll have spotted that last week I knew the team that was to be named as the team is always leaked.

After watching Edinburgh I thought Mike Blair and Greig Laidlaw would have started at half-back and, after the A team demolition of England Saxons, Duncan Weir and Stuart Hogg must be much closer to the squad.

I'd thought the selection of Dan Parks would mean a game of early territory but, instead, Scotland ran the ball from the 22 a few times.

The problem areas in recent years have been the front row and the midfield. I suspect that the likes of Ed Kalman and Geoff Cross offer more in mobility at tight-head and Ryan Grant and Jon Welsh offer greater bulk on the loose.

The second row is fine but Robert Harley needs schooled there.

The back rows are fine. We always produce back row forwards but I am a fan of Richie Vernon and he might offer more pace and zip from blindside flanker and Kelly Brown was missed.

As I said earlier, Laidlaw and Weir are ready to play in the 10 slot, I can't pick between our three scrum-halves, though Chris Cusiter is back on his game.

I'd stick the Lamonts on each wing despite a fine debut from Lee Jones, and Tim Visser is eligible to play for Scotland in the summer but Stuart Hogg is ready to be put in at full-back right now.

Which leaves the troublesome midfield. From what I've seen Matt Scott is practically ready, and Clermont's Mark Bennett should be monitored. We need a distributing midfield.

And lastly the system. The current Scotland system is based around the supposition that when the ball is in very wide channels there is a hit up off the scrum-half, but in general the ball goes scrum-half to stand-off and then gets to a runner.

I'm just not sure it's working especially since Scottish stand-offs, in Saturday's case Parks, glide out with the ball they are giving and invite defenders to smash the receiver.

The Aussies used to say you have to go "north-south" before you can go "east-west".

Maybe, just maybe, the Scotland game-plan needs to have more punch to go forward and have punishing hits closer to the original breakdown working a path to creating space for a back attack.

The English, to be fair, showed what can happen with a simple game-plan and a change of personnel. We might do the same.

And can I make one final point? There is a clamour to increase the budgets of Edinburgh and Glasgow Warriors to attract 'marquee' players but, looking through the squad lists, I'd rather we were blooding our own players to get them ready for international rugby.

Because I rather think that the search for the next generation of Scottish players for the next World Cup is on.

Oh, and I believe in Andy Robinson, I like it when a man hurts and cares like he does, but I think his selection and system need tweaked.