What's the difference between Glasgow and Edinburgh?

So, who's going to win? There's an 1872 cup at stake over two games and Glasgow are the holders?

You'll have heard all the old jokes.

A table and chairs on a pavement in Edinburgh means it's a cafe, in Glasgow it's an eviction.

Glasgow people are friendlier and Edinburgh folk will say: "You'll have had your tea?".

And if you're looking for folk wandering around the East End in tracksuits who can't speak English there is no need to wait until Glasgow 2014. 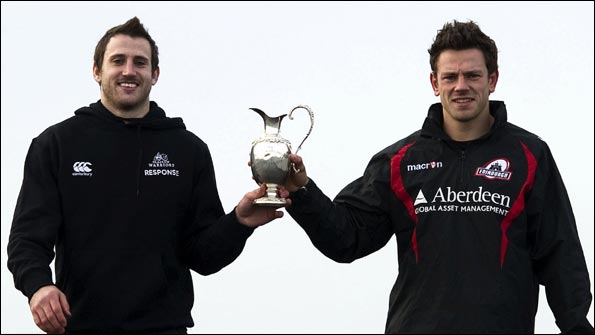 All of which masks a truth - both cities are great places to be. I prefer Glasgow and Edinburgh to any other UK cities.

And in recent times you'll have noticed they have a professional rugby team each.

Come the weekend it will be mayhem as they take each other on.

It's a trial for the Scotland team masquerading as a league game.

Let's look at the macro economics of it all first.

Edinburgh play a game interspersing a pick and go forward pack - I think they do that excellently using Jacobsen and Denton and the others - with a one pass game and then some width with big runners off stand off Greig Laidlaw and a willingness to find Tim Visser.

It's controlled and well-organised stuff.

Tom Smith has given them good technique at breakdown and in mauls and Michael Bradley has designed a game plan somewhere between Munster - hammer up as a pack and set up a back attack - and Andy Robinson's Scotland pattern.

Glasgow play a three pod system attacking both wings and the midfield depending on where they are in relation to the try line, and they throw in a one-pass game the closer they get.

Duncan Weir is edging closer to a cap call up, Jon Welsh and Ryan Grant get nearer their peaks, and enough has been said about the likes of Richie Gray.

Glasgow's defence and their scrummaging are their strong suits with Shade Munro providing a solid lineout platform as coach and Sean Lineen putting faith in a running game, Edinburgh's newly found abrasion and and individual firepower within a tidy game plan are theirs.

The interesting thing about the match is that all of the Scots on the pitch are good enough to play for their country.

There will be a head-to-head between Mike Blair and Chris Cusiter. Ross Ford will be put under pressure. Depending upon who lines up in the midfield the centres will be facing direct Scotland rivals, and as is tradition the biggest battle will be in the back row.

Edinburgh's David Denton is the man expected to make the biggest impact and wants to play Number 8, while his team mate Roddy Grant is a class open side who will want to take on John Barclay.

Barclay joins his prospective team mate Beattie from being under pressure from fellow Glasgow players Chris Fusaro and and Ryan Wilson and have been written off in some quarters.

I say all these names, of course, before I know the teams as I haven't mentioned Stuart McInally and Ross Rennie, both fine players.

Duncan Weir and Ruaridh Jackson will joust with Laidlaw.

It's all mouth watering stuff frankly.

Here's how I see the game at Murrayfield.

Edinburgh have the psychological advantage in that they do not hold the 1872 cup. It's always easier to try to win something than hold onto it.

Both sets of players - for some reason, and nobody will quite know why - will put their bodies on the line as never before this season.

Something about a local derby.

Can I simplify things? If Edinburgh contain the Glasgow scrum, get their pick and smash up through the likes of Denton, they'll win.

If Glasgow can dominate at scrum time, nullify the Edinburgh threats, and get some smash up rugby going, they'll win.

I just don't know though.

There are reputations to be made or broken. I'll be there. Can't wait.

Who do you think will win?