Great wins for Edinburgh and Glasgow

So there we are, two excellent results for Glasgow and Edinburgh. And I think they were down to two things - good players and improving game structure.

The first point is that, as always, the quality of Scottish players is as good as any in the UK. For far too long we have been told by a succession of coaches that they are working with a certain, perhaps lesser, quality of player.

Actually, that's nonsense. The English league is full of Scottish players and there's a crop of young players who are as good as anything out there. I would say that Duncan Weir and Harry Leonard at stand-off are international class.

I first saw Duncan Weir playing at school level, and he was extraordinary. 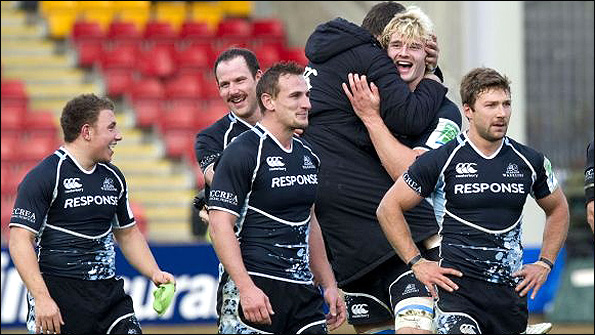 Let's look elsewhere and think of Robert Harley who, as a youngster at West, was plainly going to play for Scotland one day. You've got Richie Gray, the two young Ryans - Grant and Wilson - Stuart Hogg at full-back and Pat McArthur at hooker.

That's Glasgow, and Edinburgh are similarly equipped. Tim Visser will play for Scotland when his residency is up, Lee Jones scored one try, while David Denton and Stuart McInally, who scored the other, are obviously international class.

And I haven't named the existing internationals. We have great players in this country, always have done.

Jim Telfer's success with Scotland and then the Lions proved the value of a coach.

What the players always needed was a structure. This season they've got it.

Both teams are better prepared physically this season too. There has been much more running in pre-season and that's been too much for the more stodgy English teams in this first round of the Heineken Cup.

Glasgow's game plan has changed completely, with a three-pod system which must have been copied during the summer from the likes of Saracens, Gloucester and Canterbury.

And that intersperses a one-pass game and players who are keen and know clearly where they are meant to be on the pitch.

Edinburgh, for their part, played a smash-up, one-pass game and then got it wide.

Neither system is the same as the one employed by the current Scotland team, though. Maybe they don't need to be.

And in defence, too, there was more bite. I know Scottish defence coach Graham Steadman was put in to help Glasgow during the week. I don't know who asked for that and don't know what he contributed but the defence was admirable and has been good to date in any case.

I think we have the players to win top-level games. If they are prepared properly and given the right structure to play on the pitch within a positive environment, they can win.

And that applies at international level too. I think we have players who are good enough to win at that level.

It's a great feeling, because if you don't teach your players and don't give them a structure they believe in, then they leave and go elsewhere. LIke Richie Gray.

This weekend was a massive step in the right direction.