What do you make of all these 'warm-up' games?

I don't quite understand them. All parties will deny it but players are being injured in the lead-up to the World Cup because countries are trying to make money.

Oh it's lovely to see Cardiff, Twickenham, Brisbane or Dublin stadia filled by fans eager to watch teams, in theory, get ready to play. But the reality is that these are professional players who are ready to get on the pitch no matter when.

And as they lead up to a big event they don't need beaten up every Saturday.

And although the relevant countries have been pocketing some cash in a year where there are no autumn Tests - Wales and England must have been in collusion to get big crowds - I wonder at the balance between getting some game-hardening time on the pitch as against the likelihood of injury. 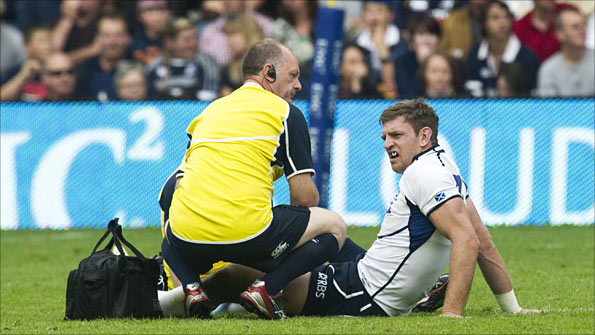 Nikki Walker was injured in Scotland's summer Test against Italy and will miss the World Cup. Pic: SNS

Perhaps the Scots have done it correctly. Two quick games and then get on the plane.

David Wallace's injury was such a waste for Ireland. Nobody really needed to know whether Wallace might or might not start for Ireland, and he was injured playing a game he really didn't need to. I felt so, so sorry for him.

I've been trying to imagine what it must have been like playing in these games. For the marginal team members it could have been invigorating and a challenge, but for most of them it must have been a very different challenge as they tried to look incredibly interested and industrious while trying desperately to avoid injury.

There was one passage of play in Dublin where, I swear, I watched Irish forwards go in half-heartedly near the end of the game.

There are counter arguments to my position, primarily arising from the All Blacks who said that they were "undercooked" four years ago. As I watched Kieran Read and flanker Adam Thomson injure themselves against Australia with the start of the World Cup only a fortnight away these warm-up games, albeit even Tri-Nations matches, were shown to be almost completely irrelevant .

All the headlines are about players missing the World Cup, not about how one team shone or another won the Tri-Nations.

And now my team Scotland head to New Zealand via Australia. There are four games on the way to the quarter-finals. Romania, Georgia, Argentina and England.

Warm-up form goes out the window to some extent. Romania might not be that strong. But the other three games are huge obstacles. I like the IRB world rankings and at the moment Scotland are eighth, Argentina ninth, and England the second top Northern Hemisphere team behind France in fifth place.

On that basis Scotland should get to the quarter-finals after losing to England.

Or could Scotland beat England? Warm-up games, I feel, will have little relevance to the result.