Why is nobody investing large sums of rugby in Scottish rugby?

Scottish rugby needs a Roman Abramovich, or even a Roddy McBramovich. Will someone please write a cheque or two?

I always wonder what I'd do if I won the Euro Millions Lottery. 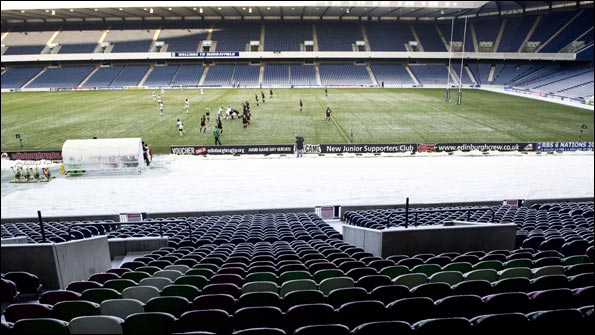 After a long list of purchases including a couple of curries and a nice Scottish lager, oh and a few donations to worthwhile causes, comes the sneaking suspicion that it would be good to help out Scottish rugby.

A million to both professional teams. Or might it be a couple of million.

Or maybe I'd put my cash on the table and insist on both Edinburgh and Glasgow being wound up and my money going to the club game.

Or maybe that's the problem - nobody knows what their money might be spent on.

Anyway, dreams are dreams and my life will probably always include an element of bumping along without wealth nor the ability to invest in rugby.

It was the Roman philosopher Cicero who said: "Endless money forms the sinews of war." Which is why I am so skinny now.

I heard an impassioned plea last week where a speaker said that, at present, rich rugby fans in Scotland are particularly bad at spending their money on the game and actually put rugby behind their families, shopping for trendy shirts on a Saturday, and their golf club memberships.

Can you imagine putting rugby behind your family? Where the heck are the real priorities these days?

Which begs the question: why, aside from the admirable backing of some clubs to a the tune of a few thousand pounds, do rich Scots keep their cash to themselves?

How can England and France have massive individual investments in rugby at club level, and a huge corporate and personal following at international level?

As a Scot I found it quite informative, and annoying, that Twickenham and Cardiff were essentially sold out for two summertime friendlies while Murrayfield had under 30,000 fans turning up to watch the game against Ireland.

My gut feeling is that the SRU is caught within budget limits; money, which is in short supply, goes on essentials like wages and ground costs.

There is little left over to really grow the game or to promote it, nor is there much time to find the kind of people who might just write a cheque or two.

The next SRU step will undoubtedly be along the new media path as they try to win over a new, younger audience.

There are opportunities to bring people to the ground using Facebook, Twitter, Google+ and all manner of other newfangled tools.

But I think the bigger issue is the cash the game needs to keep playing numbers up, and the battle to bring back the fans who have deserted the game north of the border.

Maybe it really is time for those who have given up coming to rugby to, instead, put a hold on their shopping trips and golf subscriptions and come back for the occasional Saturday, or is that just not possible?

Does anyone out there have a sensible and logical reason as to why Scottish rugby hasn't attracted a few individuals with sensible cash to put some of it into the game?

Oh, and before we all get too defensive, I was in a Glasgow taxi the other day and the driver said one of his pals, who had been a lifelong Partick Thistle supporter, had given up football and now comes along every Friday night to Firhill to watch the Glasgow rugby team with his family and is hooked.

The product could be better but it can be really good; pitch up to watch Edinburgh or Glasgow occasionally and you might get a surprise.

The marketing, the atmosphere, the investment and promotion and the cash are all sub-standard though.

Which is why, friends, this World Cup is so, so important.