Little given away in first round of phoney war

Right, what did you think of the weekend?

The first games in the phoney war are finished here in the northern hemisphere, and New Zealand beat Australia. And do you know what? Nobody has been that convincing. After my assertion last week that the All Blacks are invincible they looked beatable against the Wallabies.

Magic. I wish I was going to New Zealand. Does anyone have a camper van free? Ah, sadly for me, it will be watching on TV.

Let's leave the southern hemisphere teams aside - other than to marvel at Digby Ioane who can, they say, bench press 190kgs - and concentrate on the two games played in Britain.

The All Blacks, sorry England, looked pretty good and I am a real fan of Welsh rugby and their simple system. Both Wales and England look as though they are going to frighten some teams. This could be George North's tournament.

What about Ireland? Well, the game against Scotland was their first outing of five - they were under-cooked in 2007. Rob Kearney had a point to prove as did Andrew Trimble at full-back and right wing, respectively.

Denis Leamy was outstanding in the eight jersey, and, although you could argue that, with the exception of the half-backs, this was the Irish second XV, they contained Scotland. 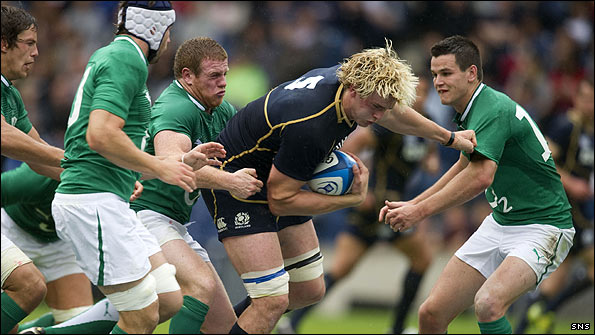 Richie Gray was an impressive performer for Scotland against Ireland

And so to Scotland. It took a last minute set-piece move straight from the training ground to cross the try-line. Joe Ansbro came in off his right foot after Nick De Luca's pass.

For the rest of the game, if I am honest, the team looked to be training in public and deliberately hiding some moves. Much of what happened came from runners lining up from Ruaridh Jackson's distribution in the 10 jersey, Graeme Morrison again looked powerful and Richie Gray is an absolute certainty.

But Andy Robinson's head-scratching might have been made even more fervent after the game and only the easier run out against Italy will tell part two of the story.

Given parental involvement, I've got to stay clear of talking of individual player chances to a certain extent.

But the big story of the day, at Murrayfield, was the delayed kick-off. Thousands of fans turned up late to buy tickets or to pick up pre-ordered tickets.

Now, I don't know all the details, but it's a good story when people want to come to the game and buy on the day.

It's a bad story, however, when the capacity necessary in terms of systems and people isn't there to make it an easy process.

The bigger picture? Well, having watched the Tri-Nations and these warm-up games, it looks as though the southern hemisphere teams are more advanced at this stage.

The New Zealanders are playing to an extraordinary tempo, the Aussies can call on Rocky Elsom, the Welsh players are looking powerful and will stick to their system, England look big with Matt Stevens doing well at tighthead prop, Ireland have still to show their hand, and Scotland, well, Scotland have to settle on their squad and get across that try line.

Boy, oh boy, bring on the World Cup. It doesn't have to be a big camper van, but does anyone fancy buying one and we'll drive all the way there?