Time for pro teams to help Scotland's cause

How can Scotland beat England on Sunday? Scotland, of course, are led by Andy Robinson, who, I suspect, will get a very respectful return to base from the England fans.

As I write this, the team hasn't been picked but, in all probability, most of the players in Robinson's side will have been born after the last victory, 1983.

Being the eternal optimist, I think the game is winnable, but I say that while believing that this is a very, very good English team. 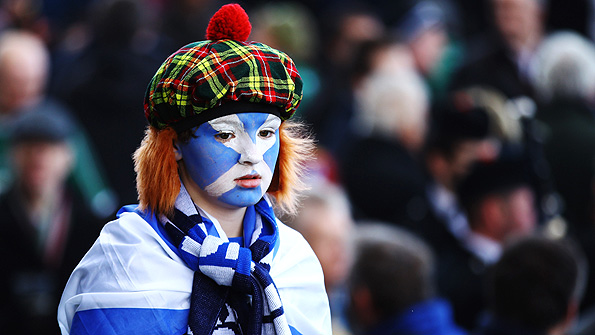 Scotland fans have seen little to cheer them in this year's Six Nations campaign. Photo: Getty.

The game happens in the middle of what you would have to call a mini-crisis north of the border.

How much longer, for instance, will the SRU continue to fund professional rugby in Scotland in the shape of Glasgow and Edinburgh?

Unless they increase the cash and bring in a host of hired guns to bolster the teams at this time of year, then losing in their bread-and butter-league is going to be a fairly regular occurrence.

There is only so much time, effort and patience you can expend on underperforming assets and Edinburgh and Glasgow are third and second bottom, respectively, of the Magners League.

And it is almost impossible to win when you are drafting in club players to cover for internationals, and the team you play against can bring Jerry Collins off the bench.

Gordon McKie, the chief executive of the SRU, says on the BBC website that the annual cost is in excess of £10m a year and you have to ask if that is money well spent, even though he says in the interview that the SRU are committed to both teams.

The SRU can either increase funding to make the sides competitive, or take a more Argentinean role and allow the best players to migrate south of the border, or overseas, to allow someone else to foot the wage bill.

That's the honest assessment of the preamble to this particular Calcutta Cup clash. Scotland have an ambitious coach coming back to his roots and on a five-year deal.

England eye a Grand Slam and success at the World Cup.

One team is riding high; the other, very probably, isn't.

In theory, England have the better set-piece, a more durable and hard-running midfield, and even the Scottish second row, Richie Gray, says his hero as a boy was Martin Johnson, the current England manager.

So do Scotland have any hope whatsoever? Of course.

I really hope they wipe the record book, but I think it needs better defence, less kicking, more acceleration into contact, more aggression, and a belief that every single one of them can carry the ball through contact to win at Twickenham for only the third time since the war.

Glasgow and Edinburgh, after all, exist almost solely to produce international players for Scotland. All those millions, then, are spent almost exclusively for occasions like this coming Sunday. Come on Scotland (he said, as neutrality went right out the window).