Don't look back in anger, or pride

So that's the end of the Six Nations. What do I do with my life now? I know, wait for the superb people of New Zealand to host what will be an emotional rugby World Cup.

It's going to be a long, long summer, as someone no doubt once sung in a song.

So what happened to Scotland in this Six Nations? And who has been the best team in the Six Nations?

First up, I think the Scots came into the competition over-confident. I've been there myself in life, believing that what I have just done successfully means that what I am about to have a go at is easier.

Actually, it doesn't work that way. Things don't click because they did a few months ago in Argentina. 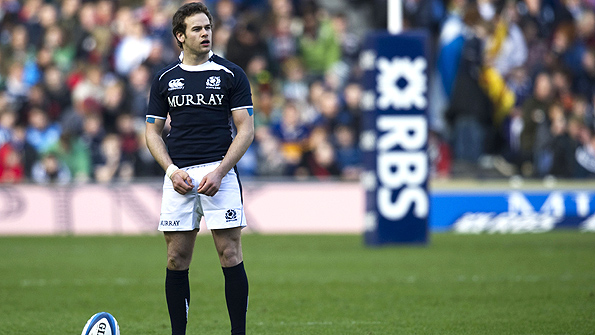 Glasgow Warriors' Ruaridh Jackson has established himself in the stand-off role for Scotland. Photo: SNS.

As soon as you hear people talk about having a good team or even come out with phrases like "we haven't become a bad team over-night" then, I think, they are making a mental error.

Professor Carol Dweck from Stanford University proved that there is only one winning philosophy, which is: the team that practises the hardest, works the hardest and smartest, and tries the hardest, ends up winning more games.

Life is always about looking forward. It should only be TV reporters who want to look back because, bluntly, they have the pictures and they want to use them.

I just wish we had started the tournament the way we finished. Why didn't we? That's the big question.

The most pleasing thing for me, from a Scottish point of view, was to see two Scots, at opposite ends of their careers, play superbly.

Ruaridh Jackson, at stand-off, has now won the position with ever improving displays.

I know that his parents have had to listen to ill-judged comments about Jackson, even in the Glasgow stand, but he is a threat with the ball, he can tackle, and he can kick. He now needs to get stronger.

And what can I say about Chris Paterson? He may appear a veteran - in fact, he is only 31 - but he still runs like the youth who burned up the grass at the Melrose Sevens.

In a game at Twickenham that Scotland might well have won, Paterson's role was key thanks to his kicking and that tackle on Ben Foden.

He then replicated the feat on a seemingly home and hosed Luke McLean. Bluntly, Paterson still has pace.

If I had to add one more player who, I think, made a real difference then it would have to be Geoff Cross.

Ever since I first saw him in a blue jersey I have thought of him as a competitor. He deserved his starting place.

The longer the tournament went on, the better Scotland became.

Andy Robinson's blueprint of varying a game between pick and go and playing through the 10 channel is a hard one to defend and, on Saturday, whereas Italy appeared more and more sluggish and predictable, Scotland got better.

It's a style that suits us.

Sean Lamont is probably our most fearsome attacking weapon - he has a hunger for the ball - and the likes of Richie Gray and Kelly Brown are earning plaudits from everyone.

But it's been a disappointing campaign. Second bottom is one place above where our playing numbers suggest we should finish (half of the Italian playing numbers, if you ask) but the players must know it could have been mid-table or above.

Who do I think is the best team in the Six Nations? Well, there is only one team that cheats like crazy, is the best drilled at breakdown, has war-horses in key positions, has started defending by keeping people up off the ground, and wears others down.

Yup, my team of the Six Nations is Ireland.

Lots of you will disagree, but for Scotland it's time to forget this Six Nations and set sights on New Zealand. A real rugby country, a fantastic tournament ahead, and the chance of a lifetime. Camper-van, anyone?