Inexplicably bad day at the office for Scots

Oh dear! Saturday started off so well. A bit of telly, a bit of radio, a bite of lunch, some fireworks, the anthems - and then behind the microphone for the game with all the excitement of a 15-year-old who's bought a train ticket and had the chance to sit beside the girl he fancies.

And then? Well, some Scots in the crowd left early and that tells you something.

What I don't understand is how a good team, a team that's beaten Argentina, South Africa and Australia recently, slumped the way it did in the 24-6 defeat at home to Wales. The beauty, or the horror, of sport is that you can't win all the time and sometimes you have really, really bad days.

In theory, the Scots were favourites and on the way up. In reality, the Welsh were backs-to-the-wall and had to win. So the first point is to say that the Welsh demonstrated a hunger that the Scots lacked - and that applied to many parts of the game.

So I have to praise the Welsh, and don't mind doing so, because rugby's their national game and they have been hammered all week by their press. They even played the song "Under Pressure" on the bus to the game as if to underline a point. They handled the pressure. Scottish players, by contrast, did not.

The second point to make is that I didn't understand why the Scots changed their tactics in a week and kicked so much early possession at the Welsh. Perhaps it was the weather, but in Paris a week ago, Scottish rugby players ran and handled the ball from deep within their own half and had a game plan that, in its audacity, set the French a challenge. The French found themselves tackling Scottish players.

I think we'd have had more success if that had still been the case. I have never liked long kicks, or kick-offs that land unchallenged, but that might just be me. 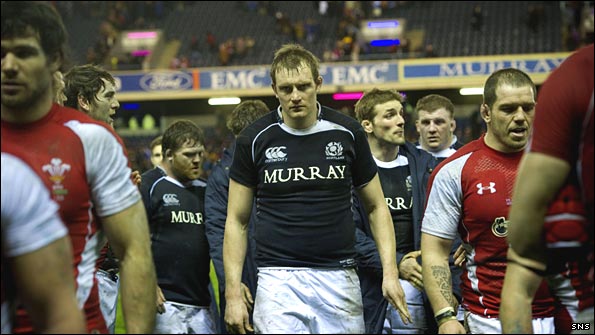 The next difference was midfield firepower.

On the day, the Welsh midfield was outstanding. Phillips, Hook, Roberts and Davies were bigger than their Scottish opponents and prepared to run at Scotland's 10/12 channel, with Hook, in particular, looking electric.

Scotland's midfield did not fire in comparison. Sean Lamont, when he came on, looked like a one-man wrecking ball that might fit in there.

And then comes the scrum. It's hard to tell whether Scotland's scrum has "gone backwards" or whether there is now a perception that it's struggling and therefore referees, who watch the telly, penalise our team when a scrum goes down. After all, they have to make instant decisions.

Can I just finish on this? It's hard for me to write these blogs when it's a Scotland team I used to play for, I have a son in the system and I know what it's like to have gone through this.

Crikey, I remember coming back, as a player, from a game in France and the Scottish press talked of the shame of Scotland's players, who, it said at the time, plainly weren't trying. I played in the game - and I was trying.

Here's what I think. Andy Robinson has given this little country of ours some incredible results recently. He, you, me, even the players, all realise that he has a tiny pool of talent to work from - in fact, just two teams. It isn't all blown out the water in one game.

The coach, the players, the management and the chief executive of the Scottish Rugby Union have all gone on record as saying that the principal purpose of the Scottish rugby team now is to "inspire a nation."

Now, I don't happen to believe that it was as bad as some people are making out. You can't win every game.

But, if I am honest, a lot of that wasn't inspiring. I hate it when spectators leave early, because they are sending the team a message.

I bet you that, like you and me, Robinson and co will sit down and watch the video, but I bet you, too, that few people, even in the Scottish team's coaching structure, will be able to put a finger on exactly what went wrong, or at least how they fix it.

Can you say that you "need" to win a game against Ireland? I wonder.