Great memories of a great contest - roll on the Six Nations

Go on then, what is your favourite Five/Six Nations memory? And, deep down, do the results matter?

Glasgow resembles foggy London as depicted in an old Sherlock Holmes film, but the mornings are slightly brighter, and the evenings too, and it can mean but one thing: it's just over a week until the start of the Six Nations.

If you are like me then this will make you smile more than impending spring, daffodils, crocuses, rutting stags, and the thought that not that long away we might get back to wearing short sleeved shirts.

I love this time of year.

I've talked before of being a teenager and going to games but the stage after that was getting to play for my country. As a student this meant two days off university, a full fry-up for breakfast, then for lunch it was prawn cocktail, sole goujons, steak and chips, apple pie and ice cream - and that was before the game on Saturdays.

My first game was in Ireland. It was an honour, and it was frantic, but I felt at home if that doesn't sound silly. At home with fourteen other blokes in blue.

Afterwards we sat with the Irish players. And so it went on as next up came France at home (we won), Wales away (we lost) and England at home (we lost) when a skinny bloke called Clive Woodward had a very good game. 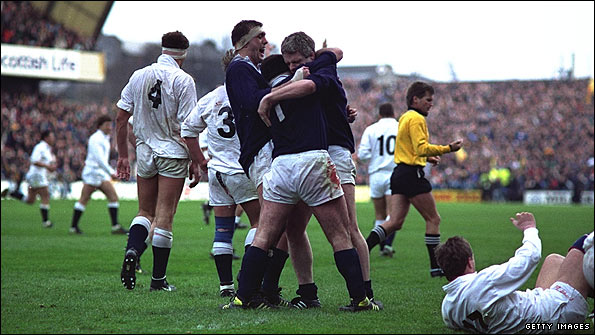 My memories of the Five Nations as a watcher, before I played, include the incredible French team of the 1970s and my Scottish rugby heroes. There were Welshmen called Price, Squire and Edwards. Englishmen called Beaumont, Duckham and Cotton, Irishmen Keane, Duggan and Slattery, and Frenchmen called Rives, Skrela (yup, his Dad) and Maso.

There was an Andy Irvine try against France, the French in full flow in Paris, and one incredible Phil Bennet try at Murrayfield.

Then I got to take park. Being involved will never leave me: the noise of the crowd, being with the opposition afterwards and feeling like kings if we had won.

Since retiring what do I remember? The great English team that had at its core Moore, Richards, Carling and Guscott. A Ieuan Evans try where Bill McLaren called him a magician, the Irish at their peak with Brian O'Driscoll imperious, the great French players like Dominici, and the Italians winning - sadly, against Scotland sometimes.

But I if I had to pick one moment what would it be? Do you know it's not a win, nor a try, nor a scrum nor a tackle. No, it's a gesture.

Oh, there have been great tries from Scott Gibbs at Wembley to Shane Williams in Cardiff last year following the injury to Thom Evans. There have been harrowing moments, and demolition jobs by England.

But I think the most important thing about the Six Nations is that we are friends, and always should be. It's about people meeting in peace.

So, the moment I pick came right at the end of the 1990 Grand Slam game in Edinburgh when, at the final whistle, Finlay Calder went straight to console Brian Moore the English hooker, who was close to tears, and put his arm around him when he noticed how his opponent felt.

I have picked a gesture. A gesture that was bigger than some actions. I am not sure that winning is everything - you might not agree.

I want to hear your memories, and bring on some tries!