Cross-border rivalry can help the Lions

It would be good to have a balanced management set-up on the next Lions tour: would that mean a role for Dean Richards?

Or as I like to think of him: the man who got caught.

Crikey, I watched a strange game at the weekend where I saw one player actually motion to the referee that he thought an opposing player should be carded, and other assorted cheating going unpunished, and to think Dean Richards was the worst of the lot is a massive mistake.

He has much to offer the game. Anyway, that's not the sum total of today's topic.

Oh no, it's cross-border rivalry and what that means for the next Lions tour. 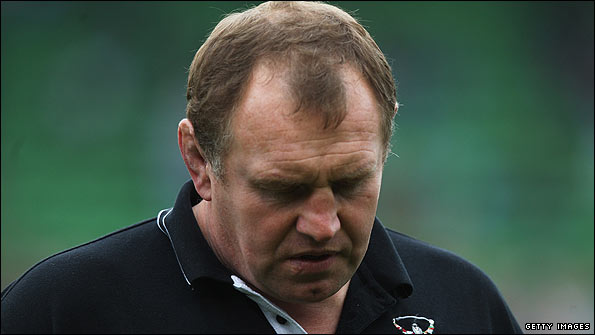 Is Dean Richards worth a place on the Lions coaching staff?

A former internationalist dropped round my house the other day and said words to the effect that: "We have to re-examine the way we treat our English neighbours because, for some reason, they now dislike the Scots intensely."

Actually, he put it stronger than that.

Perhaps the annoyance is because John Logie Baird invented TV and Eastenders has now lost the plot.

Or maybe it's because John Loudon McAdam invented tarmac and John Boyd Dunlop invented the tyre and we now have a frustrating car park we laughingly call a road network.

It might just be because we have our own parliament now to create a little distance, or the fact that many MPs in Westminster are Scottish.

Worse still, it might be because we Scots claim to have invented everything from golf to penicillin and even the Bank of England.

Or maybe we celebrate wins over the English with too much vigour.

I have never hated an Englishman or anything English in my life. Your honour.

But, the next Lions manager is Andy Irvine, Ian McGeechan may get a call, Guy Richardson is to be logistics manager, the doctor must be Scotland doctor James Robson (born in Whitehaven) as there is nobody better in the world, and Andy Robinson, Scotland coach, will no doubt be involved.

Lots of Scots in management, and, of course, half the players will be Scottish. Which has to be followed full in the knowledge that, as Billy Connolly says, "Aye Right" is one of the few times when two positives make a negative.

But whatever the set-up of the Lions tour the management and coaching team has to be balanced and Andy Irvine has a task in selecting a blend of winners.

There are fantastic coaches in England and Wales and Ireland, from Brian Smith and his attacking system (ex Aussie but capped for Ireland) at the international level to Richard Cockerill at the relentless Leicester. I love the way that team gets to the top of the league.

Coaches can't be in charge of an international side in the run up to a tour, so can I suggest a coaching manager role on the next Lions tour for Dean Richards.

Now remind me. Was the last winning Lions tour to Australia not in 1989? And who was in the squad? Ah, yes, Dean Richards.

So, let's hold hands across the Border, pinkie to pinkie and thumb to thumb... I'd like a coach who's an Englishmun.

Because, as they probably say every time Dean sits down to dinner, the steaks are massive.