Should the Six Nations have touch judges and referees who are women? And as we don't at the moment, are we behind football, a sport that has female officials in the English Premier League?

It was the very fact that football does indeed have female officials at the highest level that exposed what we might call an "off-mic problem".

We probably have the same problem.

Life is complicated: I've been part of sexist conversations with other men so I'm not perfect, and Loose Women, a programme, I confess, I have not watched in its entirety, makes fun of men.

Rugby songs, or at least many of them, are sexist and homophobic and can be guaranteed to clear a room in 30 seconds of anyone bar the singers who are left to continue in their drunken, high volume, six-part harmonies by themselves. 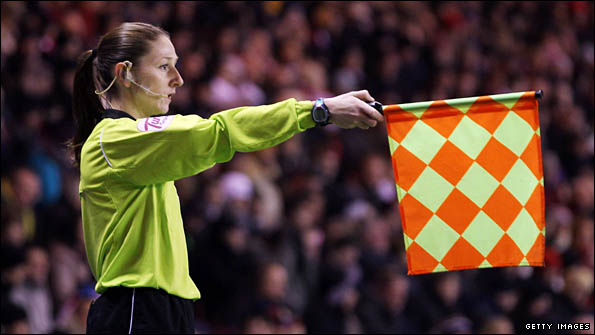 Should rugby introduce female officials like football has with assistant referee Sian Massey?

Edwina Currie, on Question Time, suggested that Will Self was less gorgeous than Chuka Umanna, and although it was to make a point about retaliation it was still playing the sexist game.

I can make an argument against men and women playing against each other in full contact rugby. Men, in general, are bigger and stronger than women.

I can't, though, make an argument for women having, for example, worse hand-eye co-ordination, eyesight, logic, brains, driving ability (I bet the new Stig is a woman) or intelligence.

So, what then is rugby's argument against women as referees or touch judges at the Six Nations or indeed the World Cup?

Rugby, as a brand, belongs to both sexes: Mums and Dads take boys and girls to mini-rugby. Men and women referee games, make the teas, drive the buses, organise the clubs, provide rubs and physiotherapy, and the list goes on.

There are lineswomen in tennis, although Andy Roddick's tirade at a lineswoman at the US Open last year has led some to ask as to whether male tennis players are more aggressive with lineswomen than men.

My gut feeling is that rugby is behind the times in terms of women officiating at major rugby events. Perhaps there are no women high enough up the refereeing ladder but that needs to change.

So, there we are, I think women should officiate at the Six Nations and World Cup.