Is one punch a red-card offence?

Is it right that one punch to the head means a red card in Scottish rugby?

The Glasgow versus Edinburgh derby was a hot-blooded, no-holds-barred and sometimes superbly abrasive game of rugby and, as I write this, it is fresh in my mind.

It was a superb advert for rugby. The players weren't thinking about the money, or the Magners League points, or the glory; they were thinking about winning.

At the end of the game, Edinburgh lock Scott MacLeod and Glasgow flanker Chris Fusaro threw a couple of punches. And then they threw some more. 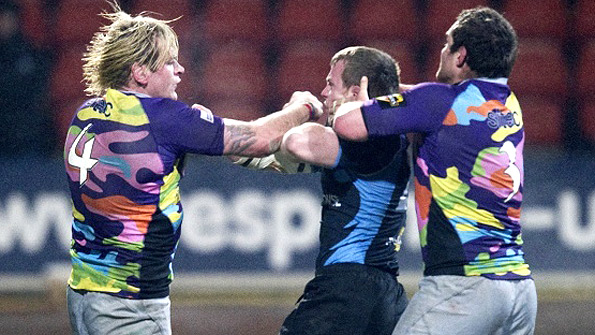 Scott MacLeod and Chris Fusaro exchange blows in the first leg of the 1872 Cup. Photo: SNS

This wasn't your playground, slap-in-the-face, Pansy Potter stuff. Oh no, it was more like ice-hockey meets rugby from the 1974 British Lions tour to South Africa when, legend has it, a call of "99" from any British Lion wasn't an ice cream order, but instead an order for each player to hit the closest Springbok.

Some of the punches at Firhill landed.

I may be wrong here but in the online booklet "laws of rugby union", as supplied by the IRB, a punch is a penalty offence.

In fact, here is Law 10.4 a: "Punching or striking. A player must not strike an opponent with the fist or arm, including the elbow, shoulder, head or knee(s).

Only thanks to Scottish Rugby Union's "no tolerance" policy is a punch to the head an automatic red card.

Neither player was hurt, ref Andy McPherson played it by the book, having been given advice by a touch judge, and both players were red-carded.

We were then treated to the close-up camera shot of both players walking from the pitch, and exchanging a handshake.

Now, what I thought I'd do in this article is put forward some points rather than express an opinion.

A lawyer friend of mine once explained that the reason lawyers get involved in rugby is that players take the field expecting a certain level of contact in a game. A hard tackle perhaps, a clear-out at a ruck, or a scrummage.

Do they expect to be punched?

I spoke to a friend who had been at the game. His opinion? Brilliant, back to the old days.

Do we want rugby to be soul-less? Do we accept that sometimes things boil over? Do we think that a punch should never be allowed, as no mother wants her son or daughter to play a game where they might be, let's say, hooked from behind?

Is one punch a red-card offence?

I played in the generation when there was punching. I wonder what you, the modern generation, think of punching in rugby.