Reasons to be cheerful as Scots down Springboks

Does Scottish rugby at last have strength in depth?

I live opposite a pitch and, as I write, the mini rugby boys and girls have an extra swagger because their national team beat world champions South Africa for the second time in 41 years and have now won four out of the last five matches.

Andy Robinson talks of inspiring a nation and that's what his team did.

What was it down to? Well, a few things added together to make it work: a change in tactics first of all, for sure.

The forwards ran off Rory Lawson as a preferred option, instead of Dan Parks, which was their station against the All Blacks a week ago, and were quicker to breach the gain line.

Scotland achieved a more basic go-forward game and it worked.

The set-piece was as good as it has been too. Euan Murray provides a scrummaging presence at tight-head and with Nathan Hines at six it was a heavy Scottish pack at no time troubled in the scrums.

South African line-outs were similarly dealt with and the forwards coped with the Springbok rolling maul for the most part. 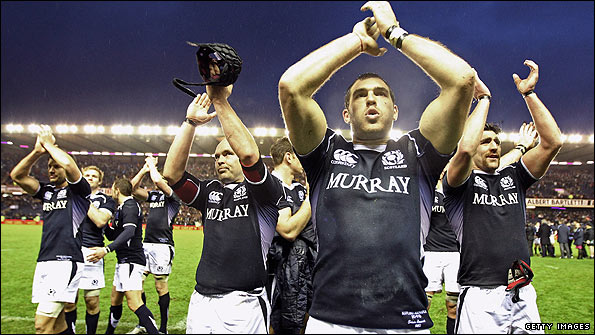 Add to that a belligerent Parks acting like the happiest man in the world, smashing kicks downfield and gleefully sending the ball high in the air.

Plus, if I am honest, I think there was a different mind-set. The timidity of the approach to the All Blacks was replaced with fire in attack and defence.

All in all it was very satisfying, and it's hard to write this article without stating the obvious all the time.

I think the recent successes, which include beating Australia and South Africa at home, Ireland away, and Argentina away twice, are down to the happy collision of a couple of previously unrelated forces.

There is a good group of players around just now, few of whom are in the team on an uncontested basis. Richie Gray is a force of nature, but has Al Kellock as a team-mate and rival and Jim Hamilton, who played against Argentina, breathing down his neck. Add to that list Hines and Scott McLeod and you get the picture.

The same goes for the back division. Joe Ansboro had a superb debut, but Max Evans sat in the stand nursing a "stinger" and a grudge to get back into the team.

Geoff Cross sat in the West stand, Moray Low only got on toward the end of the game, Richie Vernon wasn't in the starting line-up and, if history is anything to go by, young Scottish mothers apparently give birth to more back-row players than anything else as waiting in the wings are Roddy Grant, Ross Rennie, Robert Harley, Stuart McInally, Fraser Mackenzie and Johnnie Beattie, who were all either not selected or injured.

And they will be desperate to be in a team winning games like this.

The man who has bumped into that is Andy Robinson, whom I suspect might just be staking a claim to be the next British and Irish Lions coach if this keeps happening.

Robinson is, plain and simple, a very good rugby coach.

Samoa will be tough to beat in Aberdeen next Saturday, but as I watch the happy little mini-rugby children I too am happy.

It's time to savour some good moments in Scottish rugby.