Can Scotland beat the All Blacks?

Can Scotland beat the All Blacks? That's the big question for this weekend, given that we have never done so.

Oh, and thank goodness they performed their old Haka before the England game, as the new one is an insult. And I liked the English crowd reaction as they tried to drown it out.

What makes All Black rugby special? Well, there was one ball carry against England by Kieran Read, the number eight, which summed it up.

He fielded a kick and ran into the opposition as hard as he could. It was no training-run entry into contact, he went for it as venomously as was possible.

Rule number one is that All Blacks don't hold back, and the try they conceded to England was their first in their last three tours.

And ever since Andy Haden jumped out of a line-out in Cardiff when nobody had touched him, I think most of the world realises that the All Blacks would do anything to win. Anything.

Richie McCaw, on Saturday, had one of the most unsubtle bits of lazy running, an act of which even Zinzan Brooke might have been proud. 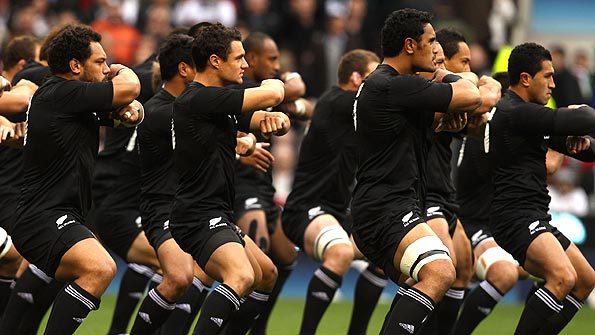 The All Blacks perform the Haka ahead of their Test against England at Twickenham. Photo: Getty

I so wish referees would penalise the All Blacks for some of their nonsense, and I wish McCaw would stop trying to get the referee to penalise the opposition as it demeans the game.

Rule two is that we all know that left back home in New Zealand are blokes who are unable to make the All Blacks but who would play for Scotland. They are, frankly, glorious players at times.

I've tried to analyse their game. The All Black forwards hit up two or three times to get some forward momentum, and then they move it wide, often behind dummy runners. When the ball is out wide they trust their fast men to get in behind and offload.

Their rucking is extremely low to the ground, and a model for the rest of us. They defend mauls with little "mini" wheels after they smash them back, and then try to get in on the wrong side.

I don't think I've seen a team, one to 15, who are so good at getting hands on the ball when an opposing attacker has been brought to ground, and then they fire over the ball to try to win it.

It's impressive stuff. So how do you beat the number one team in the world?

First, you have to get the ball.

At scrum time the All Blacks are wily. Wheels to left and right and disruption as to the height of the scrum are all party tricks and, although England seemed to subdue them, I don't think Scotland will to the same extent.

England played a three-point attack - the same as Saracens and London Irish - but I am not sure that's the way to play the All Blacks.

Listen, I never beat them either, but it seems to me that it might be worth attacking what they perceive as their strengths but going close up the sides to tie in their best defenders, and then try to go through their midfield.

Crazy? Well, I can't see teams beating the All Blacks on the outside, but if Richie Vernon and Richie Gray can get running in midfield, or if the Lamont can come on short balls, then there is a chance.

The All Blacks are a very, very good rugby team. The trouble is that, at times, their antics on the pitch make them easy to dislike.

However, to be fair to every single All Black rugby team, the way they react at the end of the game by seeking out opponents to shake hands with and then to praise publicly afterwards, is superb.

Nothing lasts for ever, although this particular losing streak feels as though it has. Can Scotland win?