Has English rugby fallen behind?

Scottish rugby can't compete at a European level, but has English rugby fallen behind?

It's a hot day in Glasgow. By that I mean the needle must be touching, oh, 15 degrees and that entices the entire population into wearing shorts and skirts and getting sunburnt. My skirt is a bit tight.

I'm tired after a long day at Melrose on Saturday and the best sevens tournament in the world. Hamilton won the Ladies' Cup. There were lots of people from Lanarkshire confused as to why they hadn't been invited, but this particular Hamilton is a rugby club from Cape Town and so named because a Scotsman founded the club. 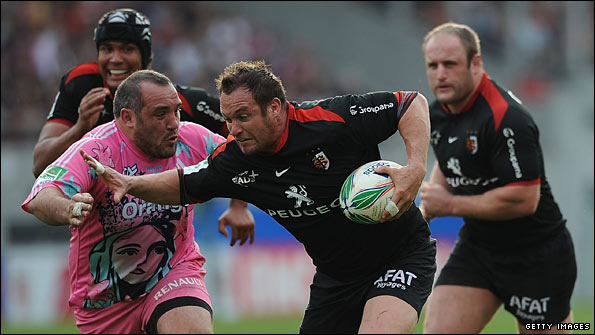 The Hamilton in Lanarkshire is twinned with Bucharest and is similar but with marginally fewer gymnasts.

My daughter Julie met a few of the South Africans out at night and said they were "nice chaps". I told her to be very careful with any South African man who says he is "nice".

Afterwards, my band played the tent. It was a riot, a complete riot. This time neither Kelly Brown nor Chris Cusiter were with us, but here they are at Glasgow's mighty West End Festival.

So Sunday was a leisurely affair, watching rugby on TV. Was Toulouse v Stade Francais the best club rugby match of all time? Very possibly. And it's great that two Irish teams and two French teams are contesting the semi-finals of the Heineken Cup, a magnificent trophy.

Two things struck me on Sunday.

The first is that English club rugby has fallen behind. I want English rugby to be strong, but English club stuff can be the dreariest of fare.

There is no point going into it, because you know what I mean. Scottish clubs just do not have the finances to compete yet play open rugby, but English club rugby is restricted when you compare the sheer beauty of some of the French action on offer. There was one pass by Cedric Heymans to Patricio Albacete that made me jump out of my chair.

Toulouse play rugby as if rugby is meant to be the most beautiful game on earth and I remember reading an autobiography written by Jean Pierre Rives who said that, sometimes, rugby is about "painting beautiful pictures". How Constable must be jealous.

And the second thing is the amount of attention players pay to each other's necks at ruck time. When a defending player is standing over the ball trying to pick it up, every attacking player in the world has been coached to grab him around the neck and twist him off it.

I don't want to sound like a sissy here, but that is plain dangerous and someone is going to get hurt. I don't think you should be allowed to grab someone around the neck and pull as hard as you can all in the name of clearing a ruck.

Anyway, out into the Scottish sunshine - complete with fleece. And, in defence of England, maybe that's the problem. English rugby might just need to ditch playing on tight football pitches and play in better weather.