Can big crowds ever return to Scottish football?

As the debate about change to our top league rages, I found myself nostalgically leafing through old league tables and attendances.

It was a fascinating exercise and left me wondering if we can do anything to return to a time when Scottish top flight football seemed much more competitive.

While by and large the big two of Celtic and Rangers have dominated our game, there was a period when that dominance was much less pronounced. 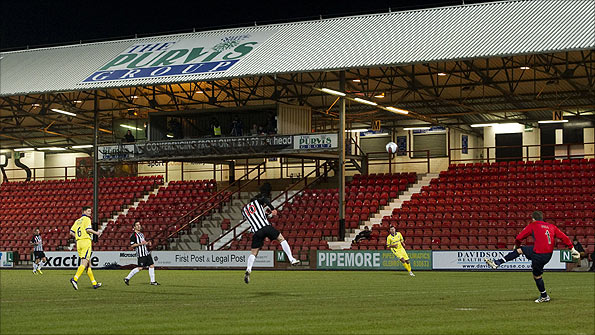 In recent years, the odd Scottish Cup or Scottish League Cup win aside, the Glasgow pair have simply been far too powerful and rich for the others to mount any serious challenge to them.

That cannot be healthy for the future of the other clubs.

Celtic's turnover in 2011 of around £52m compares with a figure of around £8m for Aberdeen.

If Celtic cannot be expected to seriously challenge for the Champions League against giants like Real Madrid and Barcelona, who have turnovers which dwarf their own, how can other Scottish clubs make any headway in the Scottish Premier League against them.

It is difficult to know how to resolve this issue.

Celtic and Rangers have grown into huge businesses for many reasons.

At present, we have no idea how Rangers will emerge from their current
problems.

Irrespective of what happens to Rangers though, it is difficult to see how anyone can come close then to challenging Celtic with their enormous resources.

Historically the Glasgow duo, while the best-supported clubs in Scotland, did not average the huge crowds they draw now.

A few years after the Second World War, the big city clubs in particular were not miles behind them at the gates.

Let's take season 1948/49 as a snapshot. Average attendances in that era would leave current day chairmen weeping into their beer in a fit of nostalgia.

It was a boom period post-war for the game and the clubs outside of the Glasgow pair never came close to repeating those enormous crowds.

However, while the Glasgow two were still better supported, the gap was much narrower than now and often the two were split by other clubs in the race for the top prize.

In 1950, Rangers again nabbed the top spot, one point ahead of Hibs, who were followed by Hearts, East Fife then Celtic.

The following year, Hibs were champions with Rangers and Dundee level on points behind them.

It is a snapshot of a time when Scottish football was much more competitive than today.

Is it simply wishful thinking that we can find a way to reinvigorate our game and bring a real competitive edge back to it?