My favourite Scottish Cup memories. And yours?

The magic of the cup, you can't beat it.

My best-ever Scottish Cup final was 1994. Dundee United's 1-0 triumph over Rangers was achieved with the charismatic Ivan Golac as manager and he had the tangerine half of the city full of expectation weeks ahead of the final.

Ivan allowed BBC Scotland to report live from the team bus as it drove to Hampden from the team hotel. I was the reporter and it quickly became obvious that the players were bubbling with confidence.

At one stage, Billy McKinlay, who was sitting the game out, wanted the bus driver to stop at the bookies to get a bet on, such was the overwhelming feeling among the players that United could lift the trophy.

Craig Brewster's close-range tap-in was no goal of the season, it was goal of the century for United fans who had endured countless heartbreaking close things at Hampden.

I was the pitch-side radio reporter and the emotions of the day were overwhelming as United took the Cup for the first time in their history.

Next day, the Lord Provost of Dundee asked me to welcome the Cup-winning side as they entered the city square in Dundee to a packed 20,000 crowd after an open-topped bus procession through the thronged streets of the city.

The crucial goal that day was a neat combination between Christian Dailly and Brewster, both Dundee boys.

That local element made the day extra special. Who among the masses that followed United to Hampden that day hadn't dreamed of pulling on the tangerine. I still do every night at bedtime. So the day will live forever in my memory.

Forgive me too for featuring United in the "best-ever" Scottish Cup final: one that they didn't win but lost narrowly in a stunning end-to-end game of football to a magnificent Motherwell side.

Three years before their first-ever Scottish Cup success, in 1991, United were bested by Well in a game that proved that two non-Old Firm teams could serve up a thrilling spectacle and before a full house of 57,319 fans.

Motherwell led 1-0 at half time through an Iain Ferguson header, but the second half and extra time provided a barnstorming game testing every human emotion.

Well goalkeeper Ally Maxwell's heroic performance, despite suffering broken ribs in a clash with John Clark, and a game that seesawed dramatically, provided the very best that the Scottish Cup final had to offer. 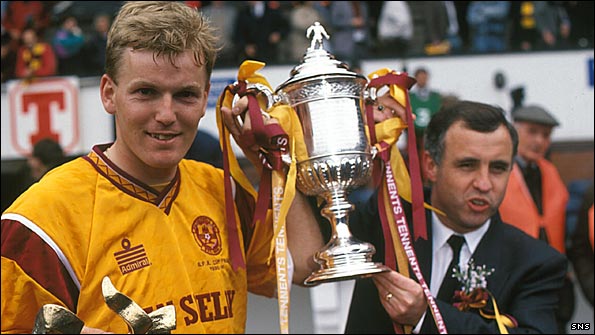 Motherwell went two ahead through an Ian Angus goal, with United pulling one back through Dave Bowman.

Phil O'Donnell, at the tender age of 18, drove through the United defence with a magnificently brave header to make it 3-1 and seemingly wrap up the old Cup for Motherwell.

But United fired back with goals from John O'Neil and, with seconds left, Darren Jackson, who raced on to a long punt from keeper Alan Main to beat Maxwell, by then in agony with his injuries.

In a rousing extra-time finish, it was the steelmen who stole the show with a goal from super sub Stevie Kirk, whose header ensured him of legend status at Fir Park.

On the way back to the bus, United fans were gutted at yet another Hampden failure, but the camaraderie and good-natured banter with the Motherwell fans outside Hampden was a fitting finale to, in my view, the greatest-ever Scottish Cup final.

I've seen some cracking goals in finals at Hampden, but right up there with the best of them is Nacho Novo's phenomenal strike against Falkirk in 2009.

Just after the restart, the wee Rangers striker hit a beauty on the turn with the ball coming over his shoulder from a throw in. It dipped wickedly as it flew over the keeper and into the net. Simply unstoppable.

The Scottish Cup doesn't provide many shocks at the final stage, but Hearts versus Gretna in 2006 came very close in my book.

I'd enjoyed a great day filming a piece for Cup Final Sportscene that season with the Hearts supporters from Penicuick. A memorable bus trip with the Jambos to Hampden for their semi-final versus Hibs resulted in every form of legal indignity that could be heaped upon their favourite Arab being heaped upon him.

But it was a stunning afternoon, providing a well-deserved 4-0 win for Hearts, that led me to the conclusion that the final versus Rowan Alexander's Borderers would see cup success for the Tynecastle side.

So it proved, but not in the manner I thought likely. A terrific performance from Gretna provided gripping drama in a 1-1 full-time finish before Hearts lifted the trophy with a 4-2 penalty shoot-out victory.

When Rudi Skacel cracked in the opener from close in six minutes before half time, I wondered if the floodgates would open. But Gretna stormed back and levelled with a Ryan McGuffie rebound after his penalty kick was saved.

Penalty misses by Derek Townsley and Gavin Skelton ensured that Gorgie would witness a street carnival for the triumphant Hearts, but it was oh so close.

Those are some of my favourite Scottish Cup final memories. I'd like to hear some of yours.