Making Your Mind Up 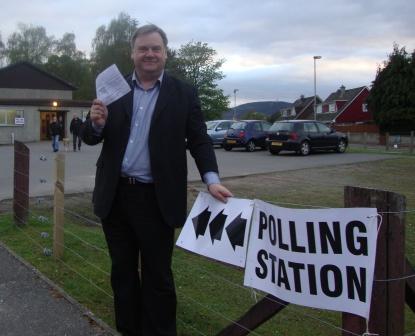 To be honest, I got off the train in Inverness and went to the polling station expecting an argument with the Presiding Officer. Apparently she'd been quite rude to Mrs Z. earlier in the day, making fun of her Polish surname and asking why on earth she hadn't stuck with her maiden name. What a cheek!

She didn't try any of that nonsense with me, I'm happy to report, mainly because I gave her the kind of manic stare that comes with a four hour train trip from Glasgow. I've seen small children burst into tears with just one look at me. My own children too.

So, I took my ballot paper and went into the booth and there and then I changed my mind about who I was going to vote for. Despite what I'd told the YouGov telephone pollster the previous week, I was still swithering right up to the moment I had that pencil in my hand.

I made my decision based on very local or family matters...on money, schools, hospitals and so on. On issues that have been devolved to the Scottish Parliament and which I knew had little relevance to the Westminster election.

Not logical but slightly better than the reason given by a colleague who told me she was voting for a candidate who had the same first name as an old friend and that he - the friend - had been a nice guy .