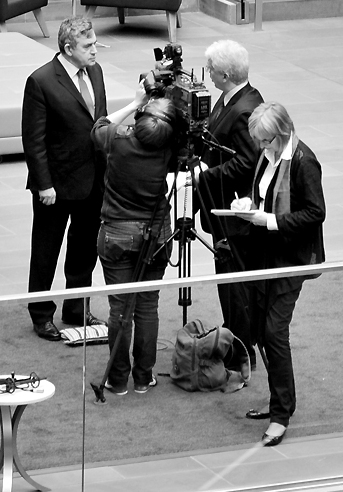 One of the occupational hazards of working at the BBC is that you are constantly saying hello to people you think you know, but only because you've seen them on the telly. I've lost count of the times I've given a hearty and over-familiar greeting to actors and presenters only to watch them stare back at you with expressions of confusion or fright. Then, a few minutes later, it dawns on you that you've been behaving like a celebrity stalker.

It happened to me again today, here at Pacific Quay.

I was queuing up at the ground floor tea-bar and was using most of my available brain power to decide between a chocolate or blueberry muffin. Then this bloke in a suit passed me and I knew the face but just couldn't think of his name.

"Hi, how you doin?" I mumbled in that semi-polite but offhand way that I do when prioritising snack choices.

Then it struck me. Not the muffin, the name.

Gordon Brown, no less, the actual Prime Minister. I turned around to see him and his entourage sweep out of the front door and take up a position in front of the Clyde where he was being interviewed for TV.

I should have realised sooner, because I'd been told he was coming into one of our radio studios for a live link-up with The World at One. I'd even commented on the presence of a mysterious suited figure who had arrived in advance of the PM to check that everything was in order.