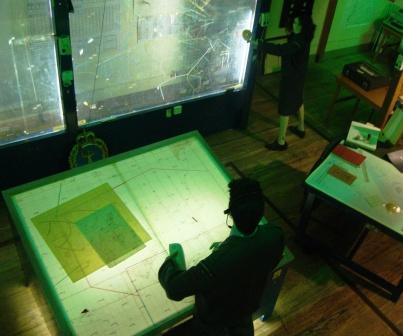 Wow. Sorry about that. I didn't mean to take such a long leave of absence but I hada week's holiday in Fife and somehow I lost the blogging bug when I was away. But I hope you've been enjoying the new BBC Radio Scotland blog. Everyone here at the station seems to be very enthusiastic about contributing entries so please give it your support.

The East Neuk of Fife was lovely and that's despite the fact that we decided to rent a cottage there just as the snowstorms returned to Scotland. That gave us the perfect excuse to go underground at Scotland's Secret Bunker. Do you know it? It's the former nuclear hideout designed to house the Secretary of State for Scotland in the event that the Russians started dropping bombs. It became obsolete towards the end of the last century and is now a tourist attraction. You can sit in the situation room and experience the sound and vibrations of a simulated nuclear blast overhead. Chilling and bizarre.

There's also a BBC radio studio which was installed so that programmes of information and "soothing music" could be broadcast during the crisis. I saw a Tom Jones L.P. sitting on the rack. Imagine that. Scotland being wiped out to the sound of "it's not unusual".

But what music should we play when the world ends. Hmmm...sounds like a theme for Bryan Burnett and Get It On.

I'm told that today's nuclear bunkers are much deeper than the old Cold War designs and I have no idea if there are broadcast studios within them. At least, no one has briefed me about them.

It's thoughts like that which make you realise your occuply a very lowly place in the BBC pecking order.

But not low enough.