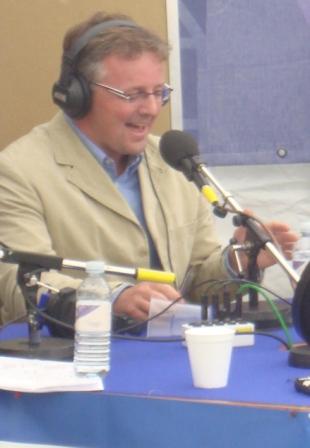 It's about time someone told Bruce McGregor that he has to choose between playing the fiddle or playing rugby. I'd do this myself, but my credibility as a sportsman doesn't stretch much further than the ten pin bowling alley. My reputation as a musician, meanwhile, was badly dented by a ill-judged kazoo performance some years ago. Basically, I sucked.

Bruce, on the other hand, was the founder member of the legendary Blazin' Fiddles as well as being the presenter of our weekly Music Cafe programme which will be launched on our airwaves next month. Every Wednesday afternoon, Bruce and his guests will be hearing about all that's good on the Scottish music scene...everything from rock music to opera with lots of organ stops along the way.

That's if Bruce can keep himself fit, of course.

He's just been telling me how he was persuaded to take part in an over-30's rugby match and ended up exacerbating a hand injury to the point where he had to neck a half bottle of painkilllers and actually strap his fiiddle bow to his arm with gaffer tape for a gig.

Now if he'd strapped the rugby ball to his hand....