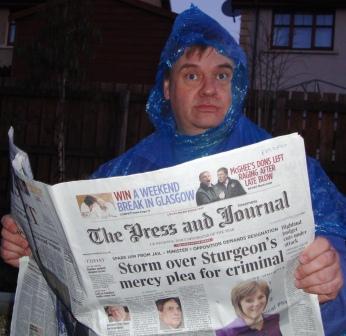 Call it Payola if you like, but I'm keeping this stylish polythene poncho and have already told my children that I plan to wear it the next time they have their friends round for a sleepover. That shut them up.

The poncho arrived in the post after a lively exchange of e-mails with a top executive at the Press & Journal . She noticed that I'd been blogging about my love of newspapers and even posting photographs of the Evening Times vendors in Glasgow.

The Press & Journal has its own methods of attracting readers and that includes turning up at rock festivals and handing out these ponchos to anyone buying copies of the paper. In the photograph I'm modelling one from the summer 2009 collection as seen at the Belladrum festival..

Now, hint, hint, I'm expecting similar gifts from other newspapers because I believe I'm single-handedly responsible for the month-on-month rise in sales that has been reported for just about every Scottish title. You should see me climb on trains twice a week, weighed down with half a tree's worth of newsprint.

The P&J, I should point out, is one of those papers that usually gets ignored by the rest of the media, despite the fact that it has always outsold The Herald and The Scotsman. I have to confess that, until my first working stint in Inverness way back in 1989, I had never even heard of it. That's what growing up in Glasgow does to you.

Now, living in Inverness, the P & J is one of my favourite reads because it does a great job with local news and it isn't stuffed with odious columnists competing for the title of Top Moaner in the I-Know-Better-Than-You awards. Who needs them when we have the blogosphere?

Ahem, if one of those columnists happens to be reading this then, of course, I don't mean you. No...you're the exception. All that clever stuff you write...it's great. Honestly. What can I do to make amends?