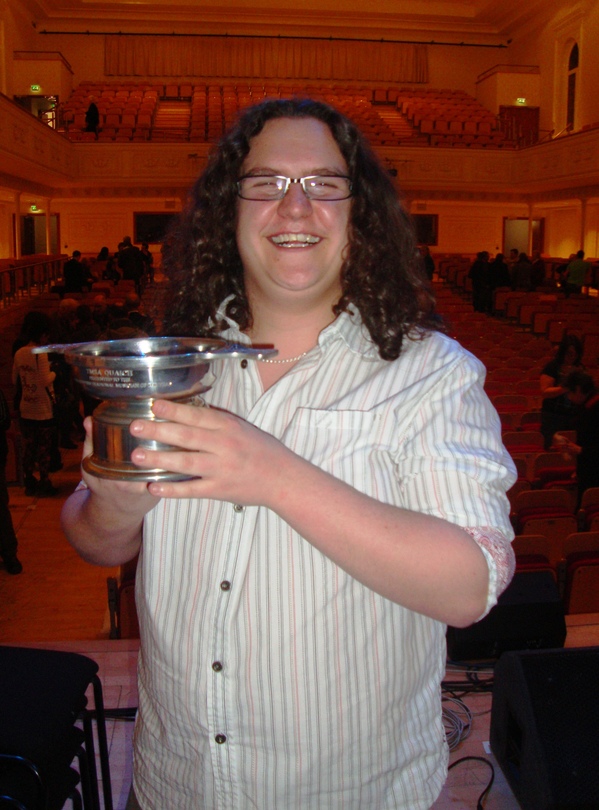 To the City Halls in Glasgow this evening for the tenth annual BBC Radio Scotland Young Traditional Musician finals. This year I opened the proceedings alongside Fiona Hyslop, the Minister for Culture and External Affairs. Then we took our seats for what turned out to be one of the best line-ups I've ever seen. This was not the year to be a judge (which I'm not) because the standard of performance and showmanship was so high.

If they had opened the betting during the interval I would have put my money on Daniel Thorpe who played the fiddle in a style I can only describe as a mix of Scottish, blue-grass and a wee bit of classical violin. His set and his rapport with the audience were brilliant, but I wondered if the judges might have thought it was too far away from the 'Trad' tradition. Besides which, the other five finalists were also superb. There was Kyle Warren on pipes, Mairi Chaimbeul on clarsach, Paddy Callaghan on accordion, Hannah Phillips on clarsach and finally another piper, Lorne MacDougall.

I'm listing them all because I'm certain each one of them will go on to great things in future years.

During the interval I escorted the Fiona Hyslop to the backstage Green Room to say a few words to the competitors. Regardless of your politics, having a Government Minister does add a bit of prestige to the event. We also enountered Ruairidh Macmillan who won the title last year. He confirmed a rumour I'd heard that he had forgotten to bring the winner's Quaich with him and had to run home to retreive it. Luckily he lives in the middle of Glasgow.

Then, all too soon, it was judgement time. I was back on stage with the "golden" envelope which I ripped open as loudly as I could for the benefit of audience listening live on BBC Radio Scotland.

"I know something you don't know, " I teased, before revealing that "the winner of the BBC Radio Scotland Young Traditional Musician competition for 2010 is........... Daniel Thorpe."

Sometimes even I get things right.

You can listen to the whole event here on the BBc iPlayer.