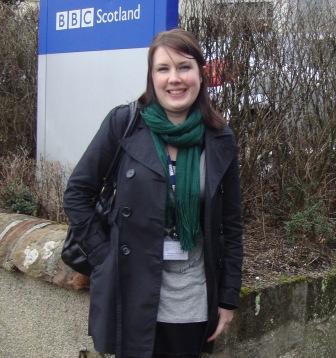 I've just been saying my goodbyes to Amy MacBeath who has become of this blog's many recurring characters. Amy, you may recall, was one of the students on the multi-media journalism course at Glasgow Caledonian University. For the past month or so she has been picking up shifts in our Inverness newsroom, compiling and presenting the local opt-out bulletins on BBC Radio Scotland. Now she's heading back to Glasgow in search of the next opportunity.

We got to talking about the future of newspapers and the launch of the new online "paper" the Caledonian Mercury. I'm fairly enthusiastic about these things but it does frustrate me when, on some other online sites, I can't immediately spot the publication date on the articles. I like to know if my news is new after all.

Amy, on the other hand, worries more about the impact on local newspapers and thinks it's smart if papers delay the publication of their online versions until noon or later. That, she says, would still encourage people to buy the hard copies.

Her concern stems from her early career in the media. She was a paper-girl, delivering copies of the Press & Journal around Inverness. A dying breed, she tells me, either because teenagers don't think it pays well enough or because parents worry about their kids wandering the streets in the early hours of the day.

I was reminded that, in the midst of this month's big freeze, when roads and pavements were under a foot of snow, I saw one solitary paperboy trudging through the whiteness, visible for miles around because of his big orange P&J bag.

"Yes, " said Amy, "I used to do that...and I still have one shoulder lower than the other."

See if you can spot that in the photograph.