My recent absence from cyberspace seems to have caused concern throughout this Ancient Nation of Scotland. No fewer than three different people (yes, three!) have asked me to account for my whereabouts. Had I, they wondered, fallen under a tram in Edinburgh? Not likely. Perhaps I had simply run out of inconsequential trivia? Again, unlikely. (I still have that ingrown toenail story up my sleeve) Maybe I had been gagged and censored by those shadowy figures who inhabit the BBC Press Office? No, not yet and, besides, they're replaced the light bulbs in that office now.

The truth is, this blogging lark requires you to be in a certain frame of mind. Angry bloggers need something to be angry about. That anger provides the energy that can power a thousand word rant about anything from international politics to the difficulty in opening those little sachets of milk.

I'm not allowed to be angry. My position requires me to absorb the anger of others. Nor am I allowed to have opinions about anything that really matters. If, hypothetically, I thought those milk sachets were parts of a conspiracy against people with big thumbs then I would have to keep that thought to myself.

So my kind of blogging requires a certain lightness of spirit which, in recent days, has eluded me. Too many meetings, too many lonely hotel rooms and long train journeys and then too many Freedom of Information requests about the cost of my meetings, hotel rooms and train journeys. The time spent answering those requests was the time I usually allocate to this blog.

But now I'm back and I have a lot to tell you about. There was the BBC Director General's recent visit to Inverness. There was that encounter with Government ministers from India and some wonderful photographs taken behind-the-scenes during the production of some forthcoming programmes.

All coming soon. I promise. 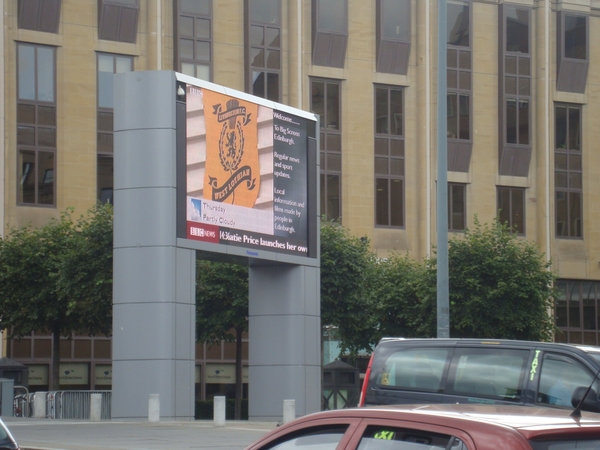 There's now a BBC Big Screen in Edinburgh. It's on Lothian Road. It's run in partnership with Edinburgh City Council and you can expect to see various BBC or Council-run events taking place around it.

The screen itself is controlled from a little desk at our offices in The Tun in Edinburgh.

Our radio teams are busy thinking up ideas about the kind of content that could be screen there. One coming excample is the coverage of Proms in the Park in Glasgow, which will be beamed across to Edinburgh on the big night.

But tell me...what would you like to see on that big telly? 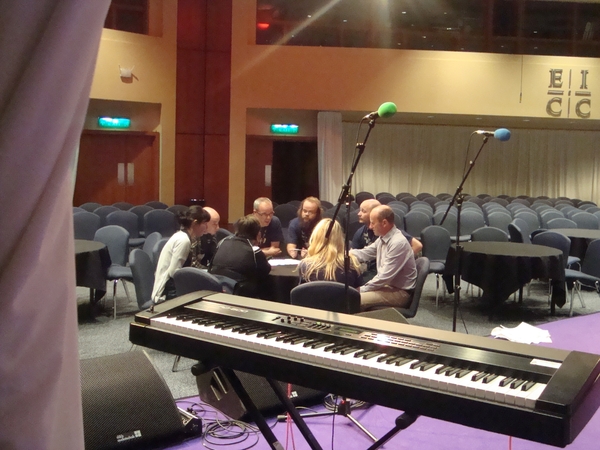 Sitting in the audience for MacAulay & Co this morning, the first thing I noticed was the ample leg-room. Comfy chairs too. I'm writing this from the Edinburgh International Conference Centre which is such a grown-up venue compared to our years broadcasting Fringe shows from the Spiegeltent. Yes, we miss a bit of that antique charm but there's a lot to be said for central heating and wind-proof walls.

Fred, this week, is being assisted on air by the multitalented Susan Calman. She gets my vote for one of the hardest working people at the Fringe. In addition to MacAulay & Co, she's also a regular on the Guardian's festival podcast and has her own shows as well.
"At least it keeps you sober," she told me, "there's just isn't time to stop for a drink."
It was a bit like that for me last night. I arrived in Edinburgh at eight o'clock last night and managed to see about half a dozen comedy performances before throwing in the towel at two in the morning.

My favourite was Richard Herring whose claims his Hitler Moustache show is all about claiming back the small moustache for comedy.
"Charlie Chaplin had one," he told the audience, "but then Hitler ruined it for all of us."

Susan Calman says she saw a party of German tourist having their photograph taken next to Richard's poster.

I wonder how they will explain that one when they get home. 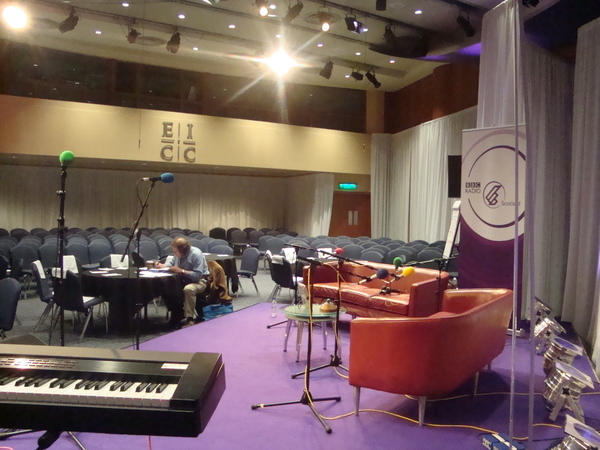 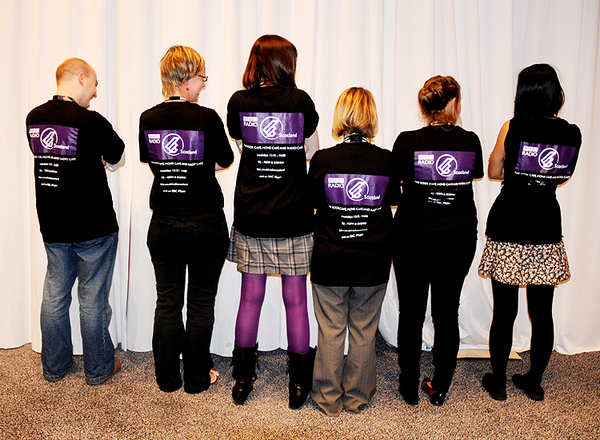 I'm sure there's an old theatre adage about how you should never turn your back on the audience. It probably dates from the days when the ticket-paying public were likely to throw rotten fruit if they didn't feel a particular act was worth the money.

Our Festival Cafe team in Edinburgh seem to have no such fear. Senior Producer, Carolyn Becket has sent me these picutures direct from the Edinburgh International Conference Centre where BBC Radio Scotland is in residence for this week and next.

Carolyn tells me that "These are our two researchers and the four work experience people who have worked tremendously hard in the run up to the EICC shows and have succeeded in getting us bigger audiences than ever before. They've been out in all weathers, sporting their branded T shirts, handing out fliers and programme information to everyone in their path. They are now our main 'meet and greet' team.They are from left to right in 'Cafe.1' - Paul and Kate (our researchers), Karen, Amy, Hannah and Eiko (our unpaid work experience crew). 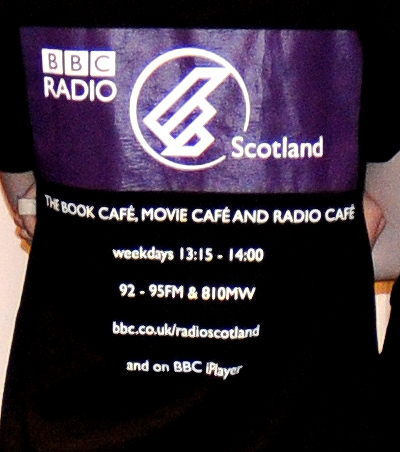 I Spy Tom Morton In The Car Park Again 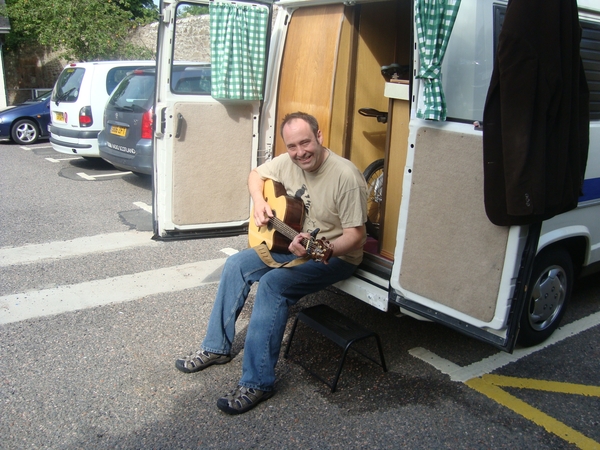 A flashback experience this morning as Tom Morton emerged from a camper van parked at the back of the BBC in Inverness. He gave me a guided tour of said vehicle and the interior can only be described as "spartan" and designed for the thinner man. It brought back memories of the period when he lived in a camper van while presenting his morning show from Inverness. Did that really happen? Yes.

Tom, today, was on his way to the Belladrum music festival but stopped off in Inverness to present his afternoon show and to tell me about the various irons he has in various fires.
The latest is his new book - Serpetine - a thriller about former spies set partly in the Highlands. It's the only book I've ever been given the chance to read while it was still in manuscript form but my description of it as a "gripping page turner" never made it as part of the cover blurb. I should have written "free fiver on page 62".

Tom and I are both convinced that we have met at least two former spies during our time living in Inverness. Maybe this is where retired agents are sent out to pasture. A bit like The Village in that old sixties TV series, The Prisoner.

So it got us thinking about a possible conversation series involving ex-intelligence officers (or Spooks). An amazing number of them seem to end up writing books or articles about their experiences. Shocking really.

I once had to sign the Official Secrets Act myself. It was while I was a student and I got a job working as a temporary postman at Christmas. To this day, I have never blabbed about my work.

But I'm open to offers. 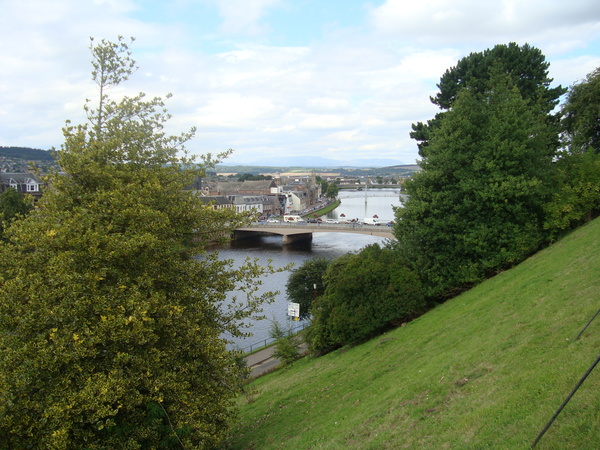 This month's photograph of Inverness...come the end of the year I might put all these monthly snaps into a morphing slide-show for no good reason whatsoever.