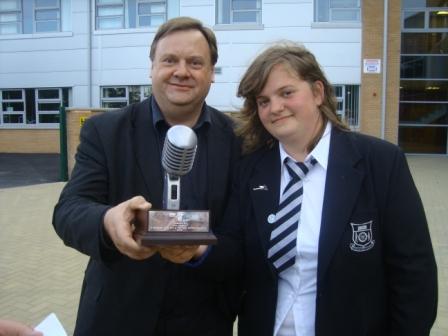 "This," I said, "is one of the best prize-giving ceremonies I have ever seen."

I was sitting at the top table on the stage of the brand new Alva Academy. The Rector, John Meney had just paid fulsome tribute to the BBC SoundTown project and had read out a long list of activities that had taken place over the past nine months. That had included live radio shows, news reports, workshops and a concert by the BBC Scottish Symphony Orchestra. More that fifty different events, in fact.

As the teachers got down to the business of handing out the sports prizes, a line of crash mats were placed in front of the school orchestra. Young gymnasts, dressed in school uniform, were called to the stage to receive their certificates. Each took a running jump towards a trampoline and performed back flips and somersaults before casually walking up the steps like it was the most natural thing in the world. Much cheering and applause from proud parents.

Then, towards the end of the ceremony, the soon-to-depart sixth-formers were despatched into the hall to present gifts to various teachers. Each gift was beautifully wrapped and connected by a ribbon to a floating balloon. Soon those balloons were dotted around the hall, with a moist-eyed teacher clinging on to each one. It was utterly charming.

Equally emotional was the rendition of Caledonia sung by Gamuchirai Nhengu.
It's the best performance of that song I have ever heard and, I tell you, that girl is destined for stardom.

The inspirational speech was given by my former BBC colleague Alison Walker, who spoke about how shy she had been when at school, but how her career in sports journalism had allowed he to meet and interview some of the finest players and athletes in the world.

I also had a couple of prizes to awards. There was the framed CD copy of the school hit song 'The Haggis' which had soared into the Scottish and iundie charts and raised hundreds of pounds for Comic Relief.

And there was the SoundTown trophy which we gave to Laura Leitch. She had impressed us all throughout the year with her technical know-how in the school studio. I'm told she's planning to pursue a career in music and sound engineering.

A great night and as we emerged into the fresh air just before ten o'clock, the sun was still shining on the Ochil Hills.

Thanks Alva. We're going to miss you.