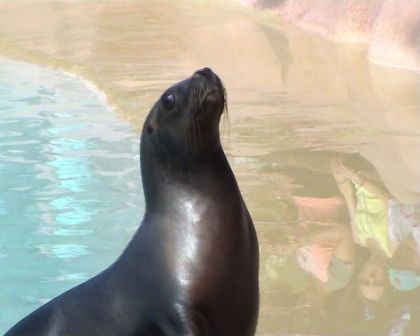 I was once asked to explain how you could teach a hen to play the piano. I think this was in a first year psychology exam when I was studying for my degree. You had to demonstrate your knowledge of Behaviourism with reference to B.F. Skinner and Pavlov's dog. Hens naturally peck so could reward one with a grain of feed every time its beak hit the right note on a keyboard, then it would have to hit two notes for the grain, then three... and so on and so on. In the end the poor creature would have to perform an entire Chopin concerto before it got din-dins. This is why you don't see much live poultry performing at the BBC Proms. The Musican's Union wont allow it.

This all came back to me as the Zed family continued our Lanzarote holiday with a visit to Rancho Texas. Yes, we were searching out the authentic local culture and so arrived at this theme park based on the American wild west. Very good it is too. Lots of scary snakes, lizards and even a couple of Siberian tigers.

Then there was the traditional sea lion show which was all the more impressive because the Australian compere was describing the action in three different languages simultaneously. The sea lions had been taught to mimic human behaviour with various uses of their flippers. Flapping flippers meant applause, a flipper under the chin was thoughtfulness and a flipper over the eyes suggested the sea lion was embarrassed about being in a theme park in the first place. Each act was rewarded with a little chunk of fish slipped from the trainer's palm.

In the end we also applauded, but got no fish, so we headed for the Rancho Cantina where I ordered a Texas Burger. This turned out to be like any other burger in a bun but with the addition of a fried egg. I was munching away happily until a man appeared in the middle of the dining area with an armful of parrots. He then demonstrated how the parrots could use various forms of miniature transport. One bird rode a little bike, another was on a tiny car and then, to cap it all, a third parrot skimmed across a counter on ice skates.

You can imagine how much bird seed that involved and yet, all the time, I had this nagging thought in my head. Why would parrots want to use any of these devices when they can fly?

If you ask me, that's a lot more impressive than playing the piano.