Waiting For The Princess Royal

My Uncle Jimmy (long gone) used to talk about the time he met the King. It was during the war, when he was in uniform and on parade, and the King actually shook his hand.

"Not that it ever did me any good," Uncle Jimmy would say. This was the way he always finished that story. I suppose he was proud to have met the reigning monarch and to have actually pressed the Royal flesh, but he didn't want us to think he was boasting. I suppose he got his payoff line in before anyone had time to ask him: "So, you shook hands with the King. What good did that ever do you?"

Today I met the Princess Royal. Her Royal Highness, Princess Anne, as was. I actually shook her gloved hand. I even smiled when she made an amusing little remark about the Squinty Bridge. But mostly, I just stood there, waiting.

I had been invited to the opening of the SenseScotland Touchbase centre in Kinning Park. It's a fantastic facility and BBC Children In Need provided some of the cash to help deaf-blind children there. There was a colourful display of music and dance staged by the children and their tutors. There was also a moving speech by one of the parents - a dad - who spoke about his own sense of pride in watching his child become part of a community and actually achieve things.

The Princess Royal joined in the applause and unveiled a plaque. As she began a tour of the building a select crowd of us were invited to a suite upstairs where we were grouped into little colour-coded horseshoes of eight people and were instructed on how we should greet the Queen's only daughter when she was introduced to us. This, as I recall, involved a slight nod of the head.

I put down my flute of orange juice and wiped canape crumbs from my mouth and then found my place in the horseshoe. I was standing next to a woman whose name-tag suggested she was the Duchess of Sutherland. For the life of my I couldn't think of any small talk that didn't involve the Highland Clearances so I said nothing.

Soon there was a flurry of activity in the corridor. Two security men came into view wearing those ear-pieces that are connected by a thick loop of white cable.
You just knew they weren't listening to their iPods. 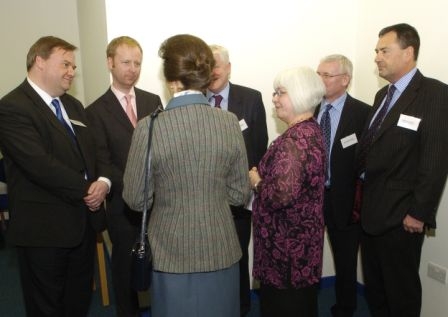 Then came the Princess. Very slender and wearing wooly, tweedy ensemble just like you always see her on the telly. Hair tied back in a bun. Big, curious eyes. You were supposed to wait until you were introduced before shaking her hand but somehow she got a little ahead of her host and was suddently staring at my name-tag and looking at me as if to say "who let you in?". I shook her glove and mumbled a hello and then smiled and nodded as she talked about the location of the TouchBase and the relative merits of a city centre location versus somewhere on the outskirst of town. My colleague Fraser Falconer said something very informative about the proximity of the Underground station, but somehow I doubted the Princess would ever need to know that.

She, in turn, said something witty about the Squinty Bridge. I didn't quite catch exactly what she said but I know it was witty because everyone around me started guffawing. I guffawed too. Then, she was gone...and so was I.

My Uncle Jimmy would have been impressed. 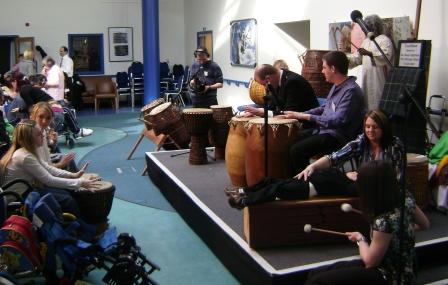