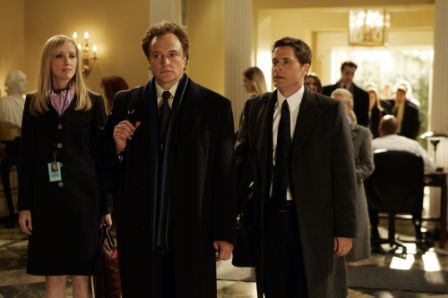 I recently treated myself to several box sets of the NBC drama series The West Wing and am now into the start of the fourth season in which President Bartlett is elected for a second term. I'm not sure how closely it matches real-life Washington politics, but it now spooks me to think that Barack Obama is about the same age as me. According to TV ads being run by Hillary Clinton, he's the guy who may have to answer the White House phone when it rings at 3 am. Frankly when my phone rings at 3 in the morning I'm hard pushed to remember which end of the receiver I should speak into.

But I've taken greater inspiration from the meetings style that is portrayed in The West Wing. Some last no more than a few minutes and many actually happen as the participants are walking quickly along corridors. How very different from the BBC culture of three hour sessions in over-heated conference rooms with tea and biscuits on hand to make sure everyone feels right at home. Sometimes there are pillows and hot water bottles.

So today in Glasgow I decided to take a leaf out of Bartlett's book. The train from Inverness got me into the city at half past twelve and by five o'clock that day I had met with 26 colleagues at Pacific Quay. Our new buidling is ideally suited for walkie-talkie encounters so no meeting lasted more than ten minutes and only five of those actually involved sitting down. In that four and a half hours I had:

Agreed a commissioning deadline for comedy and drama
Finalised arrangements for a meeting with the Controller of Radio 4
Talked to Chick Young about Gretna football club
Got some information about recent radio drama productions
Agreed in principle plans for a new weather forecast for outdoors enthusiasts
Investigated some technical problems with the Radio Scotland website
Offered some feedback to Annie McGuire about our new lunchtime sports report
Met with the writer of a new comedy/drama
Reviewed audio files for a new package of stings and jingles
Discussed the news podcast for Dundee and Tayside
Checked on my recent report for the BBC Audience Council
Suggested one of our presenters for a new radio award
Talked to a Inverness based colleague about the refurbishment progress
Discussed plans to improve our coverage of events and festivals
Talked to Frieda Morrison about the SoundTown garden
Got information on a training course I'm attending tomorrow
Agreed the structure for some job interviews I'm chairing next week
Bored people about the new hovercraft service on the Clyde.
Agreed six more meetings for this week.

Now I have no idea whether the decisions I made at these meetings would have been better if I'd given each more time and talked with a mouth full of tea and biscuits.

But somehow I doubt it.