And They Call It Puppy Love? 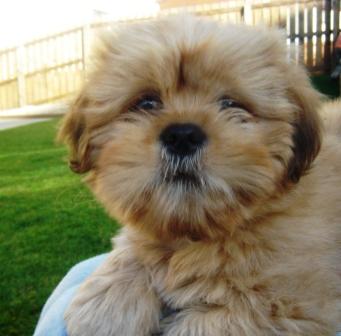 I return, by popular demand, to the adventures of Rascal, our Lhasa Apso puppy who has now been part of the Zed family home for 3 weeks. In that time he has been to the Vet four times prompting me to look at the mounting bills and remind the children that "a dog is for Christmas, not for life."

I shouldn't joke about such things because we've already had one veterinary scare after what we thought would his first routine check-up. All went well until the vet noticed that he didn't have any teeth and, given that he was seven weeks old this was "very unusual."

Mrs Zed then fell back on her academic training. She scoured the internet for research papers on canine dentistry and concluded that it wasn't so unusual after all. Apparently Lhasas are slow developers in this regard. But, still not satisfied, she sought a second opinion.

The next vet was altogether more reassuring if, perhaps, a little less scientific.
He concluded that the teeth would probably arrive soon but that even if they didn't we had no choice but to keep the dog because he was "too cute".

Anyway the good news is that the teeth have indeed arrived and Rascal has been testing them out on my fingers. Today I got my own back as we went back to the vet for more injections, worming tablets and the insertion of a micro-chip locator under his skin. All of which we have to pay for as there is no NHS scheme for pets.