Back Across The Border 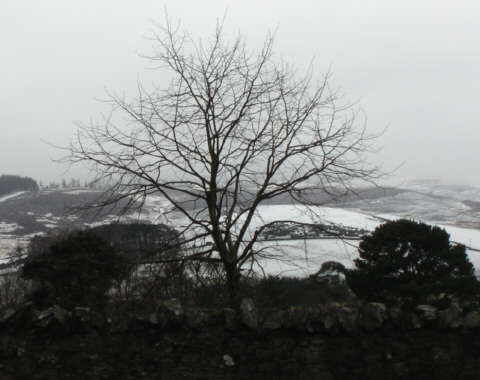 Our week in Northumbria is over. We packed the car to bursting point and decided to take the scenic route home. This meant a cross-country journey through Wooler to Kelso and then on to Selkirk. Mrs. Z was keen to see our old home. She hasn't been back to Selkirk for more than ten years so we drove around the town trying to remember our old address. When we found it, nothing much had changed.
"They've painted the garage door a different colour." was Mrs Z.'s only observation. By this time the Zedettes were getting hungry and restless so we headed on to Peebles with the promise of lunch. That's when the weather turned nasty. First we noticed the temperature plummet to zero then came the rain which soon turned to snow. We inched into Peebles on slush-covered roads and then piled into a small tearoom for toasties, tea and juice.
I bought some newspapers which immediately brought me out of the holiday mood. The Southern Reporter had an article on Radio Scotland's search for a new SoundTown in the Borders. The Herald's radio critic, Anne Simpson, gave Gary Robertson's phone-in programme a brief mention. It also carried a lengthy article by Graham Spiers based on the interview he conducted with Celtic mid-fielder Neil Lennon for a Radio Scotland programme. The Scotsman flagged up two other Radio Scotland programmes George MacKay Brown in Love and The Gospel According to Hollywood. I sipped at my tea and watched the Zedettes look longingly at the chocolate muffins on the teashop counter. Forty miles from home. Too late to go back to the beach?