A sunny drive down to the Borders this morning as I joined Gareth Hydes on a trip to our Selkirk studios to talk about our next SoundTown project. We set off just after seven o'clock and two hours later we turned into the car park at the old Ettrick mill building which now houses a modern business centre, including the new BBC Scotland base. 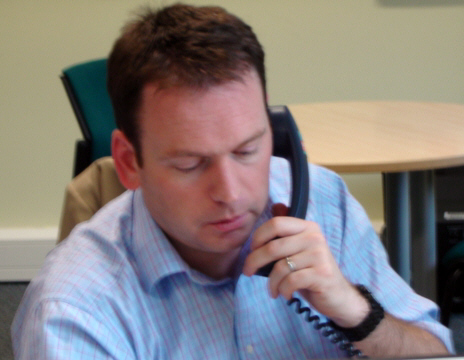 We met news reporter Cameron Buttle and his team and Gareth explained that we were now on the hunt for a local secondary school to house our next SoundTown studio from August this year. Angela Soave interviewed us both for Monday's local news bulletins which go out four times a day during the week. We had also arranged to meet Andrew Keddie from the Southern Reporter who seemed enthusiastic about the project and offered to help in any way he could.

There followed some shenanigans as a photographer arrived and asked us to pose in the news studio, in front of a map and then, finally, I followed him outside as he arranged me in front of the Radio Scotland car with a map laid out on the bonnet. Of course, it was raining by this time so we had to borrow Cameron's BBC Scotland umbrella.

Both Gareth and I worked in the previous BBC building on the High Street so, at lunchtime, we could a nostalgic trip around the town and I avoided all temptation to buy a Selkirk Bannock. The famous Bannock is a very sweet and sticky fruit loaf which I used to eat by the dozen when I lived in the town ten years ago. Indeed Selkirk was my first ever posting when I joined BBC Radio Scotland. The town seemed to have changed very little since then, but I noticed the Cross Keys pub had been given a revamp.

Sadly, I wasn't in a position to have a drink there. My alcohol-free period has now lasted for 10 weeks. So no bannocks and no booze... who says I have no will-power?