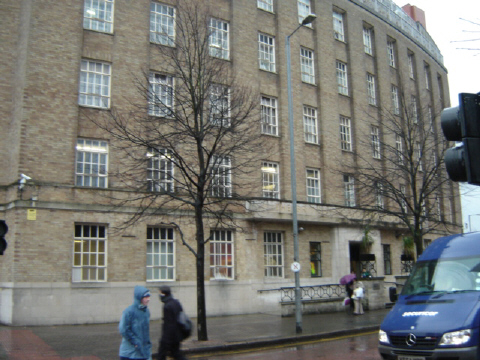 I write this from Belfast City Airport, where I am hunched over a coin-operated internet terminal. I've been meeting Susan Lovell, my counterpart at BBC Radio Ulster. A good day and I observed a real sense of team spirit among Susan's team who have been cheered by some astounding audience figures in the recent Rajar report.

On the taxi journey from the airport this morning I had noticed striking postal workers lining the middle of the road, protesting at the alleged unfair treatment of colleagues. This story was being pursued by Stephen Nolan during his hugely popular phone-in programme. I watched the show from a web-cam in the BBC Northern Ireland reception area and then later from the studio cubicle. Stephen has an easy familiarity with his callers and speaks to them like old friends, even telling a couple to "shut-up" when the debate became heated to the point of incomprehension.

As was the case with my last visit to Belfast a year ago, an invitation to have a coffee involves leaving the building and a short walk along the street to an old-fashioned gents clothing store, where we climbed a flight of stairs to a secret cafe. I keep wondering how bad the coffee must be in the BBC canteen.

At lunch we were joined by Susan's boss, Peter Johnston who told me that many Radio Ulster presenters also have a presence on television and this helps build their profile with the audience. It's a bit like Tam Cowan who presents Off The Ball for Radio Scotland and Offside for BBC Television. We also discussed the idea of having a Northern Ireland/Scotland week on both stations during November.

In the afternoon I met Susan's senior team and described some of the recent changes to the Radio Scotland schedule and our plans for the future, including the new overnight service. They seemed amused by the idea of this diary, but clearly thought I was insane when I later asked Susan's P.A., Emer, to take a of photograph of me so I would have evidence of my visit.

Yes, I may be a little loopy, but at least I stay in the building when I go for coffee.