My report today that Commonwealth Games England, the organisation responsible for the English team, are giving the go-ahead for English athletes to travel to Delhi for the Games in October will come as a massive relief to those running the event.

It goes without saying that an English boycott of the Commonwealth Games would severely weaken what is due to be India's biggest multi-sport event since 1982.

England are one of only six teams to have attended every Commonwealth Games and rank second, behind Australia, in the overall medal tally.

It was reported in December that the England team was on the brink of pulling out of the Games because of security concerns. A senior Whitehall source was quoted then as saying that there was "virtually no chance" that the team would travel to India.

Commonwealth Games England have always insisted that they'll attend the Games if at all possible, and the decision to inform their sports governing bodies that the go-ahead has been given reflects confidence in the latest security advice.

That doesn't mean, though, that the security situation is not complex. Fourteen people were injured in bomb blasts in Bangalore before an Indian Premier League cricket match as recently as 17 April. If you look at the latest advice on the Foreign Office website then you might well think twice before travelling to Delhi.

The Foreign Office says that "there is a high threat of terrorism throughout India. Recent attacks have targeted public places including those frequented by foreigners. There are increased indications that terrorists are planning attacks in New Delhi.

"You should be particularly conscious of security considerations in the vicinity of key government installations and tourist sites, when attending public events (including religious events); and in public places, including hotels, airports, shopping malls and markets." 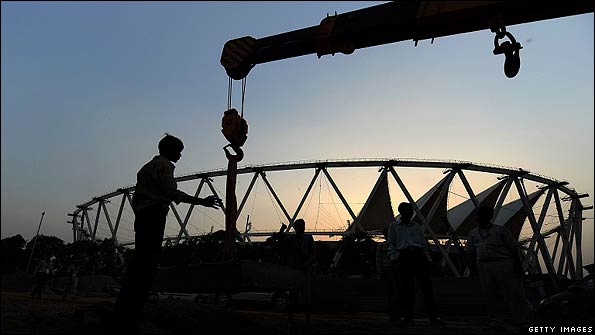 Work is continuing on venues in and around Delhi

Any athlete reading that could be forgiven for wondering if it really is worth the journey to India, even if a gold medal is at stake. So why is the English team going?

Well first it's important to make clear that security advice is being received all the time. At the moment the advice is that athletes will be safe in India. If that were to change then of course the England team would still have the opportunity to withdraw from the Games.

All the athletes will be given special protection in Delhi. The theory is that after they touch down in India they'll be taken safely to the athletes' village. Both the village and all competition venues will be guarded by a so-called ring of steel. Organisers are adamant that they can keep these areas secure - one even recently called the plans "foolproof".

It goes without saying that those running the Delhi Commonwealth Games simply have to get this right. The consequences of something going wrong don't even bear thinking about. A successful Games could set Delhi on the way to a future Olympic bid.

The challenge, though, is so much bigger than just a security one. The construction project has hardly gone according to plan, a number of venues fell far behind schedule, and there are still major issues involved in getting everything ready in time. For example one recent visitor to the swimming pool described it as a "mud bath".

That might be a story for another day. The good news today for the Delhi organisers is that at least the England team is coming. There's no point in working hard for a party only to find that the guests don't turn up.